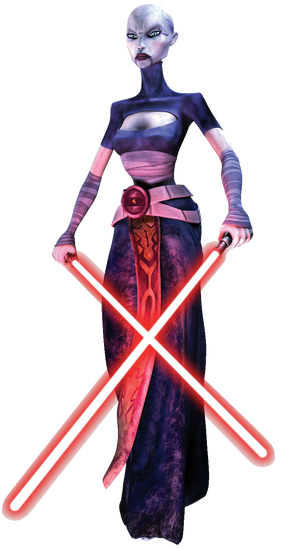 Asajj Ventress was a Dathomirian female born in the waning decades of the Galactic Republic who, as an infant, was given to Rattataki Siniteen slaver Hal'Sted by Mother Talzin in some sort of peace deal. She would, as her life progressed, become the unofficial Jedi Padawan of Ky Narec, Sith Apprentice of Dooku, and after Dooku's betrayal, a bounty hunter.

Age: Around 30 at the time of death (She was born several years before The Battle of Naboo)

Attack Potency: Large Town level (Has fought General Grievous and should be comparable to him. Has held her own against powerful Jedi such as Obi-Wan Kenobi and Anakin Skywalker numerous times, albeit she is no match for Jedi on the level of High Councillors in the end; the likes of Savage Opress and Quinlan Vos as well as Anakin having proven to be superior to her in raw power. During the later stages of the Clone Wars, Darth Sidious was wary of her growing power and of the fact that Darth Tyranus might be training her as a secret Sith apprentice and ordered her execution); Can cut characters with durability on the level of that of General Grievous and the AT-AT walker with lightsabers | Planet level (Has bested Jedi Masters such as Tholme and Kit Fisto, and is capable of competing against counsel masters such as Ki-Adi Mundi and Obi-Wan Kenobi)

Speed: Subsonic running speeds with Force Speed, Massively Hypersonic+ combat speeds and reactions augmented by precognition (Although not as powerful as the likes of Obi-Wan, Anakin, Quinlan Vos or other High Councillor level Jedi and the likes of Count Dooku, Ventress is quite fast in combat and has kept pace with opponents of such calibre numerous times) | Relativistic with FTL combat speed and reactions (Challenged many of the most illustrious members of the Jedi Order, including Luminara Unduli, Obi-Wan Kenobi, Anakin Skywalker, and Kit Fisto, and can deflect multiple blaster bolts, which are stated to move at the speed of light, despite her preferred lightsaber form's weakness against them)

Range: Extended human melee range with lightsabers, dozens of meters with telekinesis, interstellar with telepathy and Force senses (She and Obi-Wan were able to sense when Anakin had left the Teth planetary system, should be far superior to Ezra Bridger)

Intelligence: Gifted. Is a highly skilled fighter, spy, assassin and bounty hunter. She has proven herself capable of holding her own against seemingly far more powerful opponents by cunningly using the surroundings to her advantage to throw them off (as seen in her engagements with Luminara Unduli, Obi-Wan, Anakin, even Dooku)

Weaknesses: Nothing notable apart from being overconfident