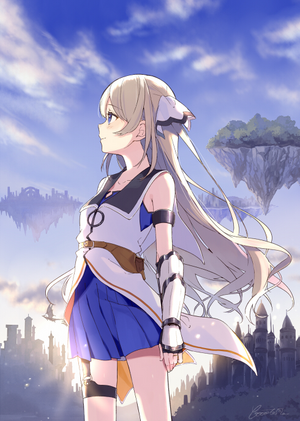 Asahi is the main heroine of the light novel and anime "Seven Senses of the Re'Union". She was a Union player, and a member of Subaru, however, on a mission, she sacrifices herself to save Haruto, and dies, losing in the game, and at the same time, dies from unknown causes in real life.

Six years later, her avatar reappears in the game ReUnion, and Haruto along with the other members of Subaru, work together to find out the reason why Asahi was still alive in the game.

Origin: Seven Senses of the Re'Union

Powers and Abilities: Magic, Expert Shooter, Reality Warping (Senses are able of affecting reality), Energy Attacks, Empathic Manipulation and Mind Manipulation (Her sense is able to affect the people's feelings, emotions, thoughts, and mind), Precognition and Causality Manipulation (Asahi can see the future in the middle of a battle, she can also see infinite possibilities and futures to choose one, being able to alter events through the effect alteration for create a new future), Plot Manipulation (Able to rewrite history. She replaced her death in the game with that of Haruto, also placing Haruto in a coma instead of letting him die as it was destined to happen according to history), Perception Manipulation and Power Bestowal (Can allow her allies to gain future perception)

Attack Potency: Human level, likely Town level with her magic (Likely comparable to Haruto. She is capable of harming Purgatorio).

Range: Hundred of meters with her guns

Weaknesses: Is somewhat clumsy, she also has little knowledge about her powers