VS Battles Wiki
Register
Don't have an account?
Sign In
in: Soul Users, Mind Users, Matter Users,
and 35 more

Nanashi's 15-year-old best and oldest friend. Like him, she is a Hunter cadet who aspires to become a full fledged Hunter. When Nanashi gains demonic powers through Dagda, however, she begins to question her role in his life and just whether she's strong enough to stand shoulder-to-shoulder with him.
- Official Character Profile

Standard Equipment: Various Weapons and Items acquired Throughout the Game.

Intelligence: Above Average. A prodigy in demon hunting. 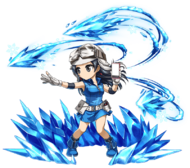