VS Battles Wiki
Register
Don't have an account?
Sign In
Advertisement
in: Characters, A Song of Ice and Fire, Book Characters,
and 18 more 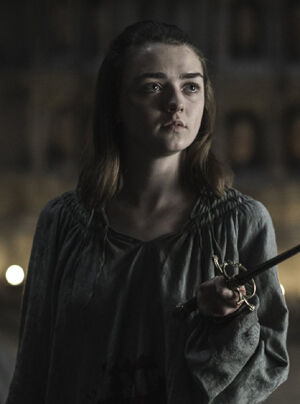 Arya is the younger daughter of Lord Eddard Stark and his wife Lady Catelyn Stark. She is headstrong, fiercely independent, disdains traditional women's pursuits, and thus is often mistaken for a boy. She wields a sword named Needle, a gift from her half-brother, Jon Snow, and was trained in the Braavosi style of swordfighting.

Classification: Human, Northern royalty, acolyte of the House of Black and White, Mercedene.

Durability: Athlete level, possibly Street level (Survived being stabbed in the gut multiple times by the Waif without much issue, tanked a held-back kick from Brienne, though this could easily be an outlier)

Stamina: High (Even though she was stabbed multiple times and having little time to recover she could still run and fight)