Arvis (アルヴィス Aruvisu, Alvis in the Japanese version) is an antagonist of Fire Emblem: Genealogy of the Holy War. After the death of King Azmur, he is appointed as the emperor of Grannvale. He is the son of Duke Victor of Velthomer and Cigyun, and the descendant of Fjalar on his father's side and Saint Maera on his mother's side. Arvis is said to possess the "gift of Kings", a talent and toughness that he had even as a child, allowing him to lead Velthomer at an early age after his father's suicide. He is largely manipulated by Manfroy because he has minor Loptous blood, making him the key to Manfroy's dark ambitions. He is the father of Julius, Julia, and Saias.

Striking Strength: Town Class (Would be this powerful with the Silver Blade) | Unknown

Stamina: Superhuman (Can contend with Seliph)

Keys: With Most Weapons | With Valflame 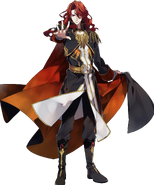 Arvis in Fire Emblem Heroes.
Add a photo to this gallery