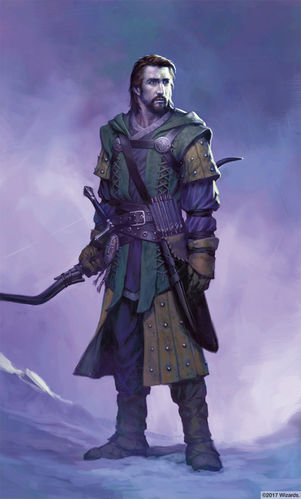 Artus Cimber is the son of a thief and member of the Harpers who, upon exploring some old ruins, discovered the Ring of Winter, a relic of the Evil Goddess of Ice, Auril. Determined to never allow the ring to fall into the hands of evil, Artus has been on the run ever since, made immortal by the devious power of the ring. Artus is widely regarded as an immensely intelligent scholar and renowned adventurer aside from his status of guardian of the artifact.

Attack Potency: At least Large Building level (Comparable to casters capable of using Freezing Sphere, Capable of freezing large volumes of air with his ring), likely City Block level (Some comparable casters have managed such levels of power via the Control Water spell), possibly Multi-City Block level (Comparable to casters of Disintegrate, which can destroy a large temple) | Small City level+ (After being Chosen by Auril, Artus became a 15th level Bard which would make him superior to legendary dragons)

Speed: FTL (Capable of completely dodging the sunlight generated by spells such as Anger of the Noonday Sun) | At least FTL (Is far stronger then before)

Lifting Strength: Varies. Either Athletic Human or Class 1 depending on the edition (Can push roughly 136 kilograms to 589 kilograms)

Stamina: Superhuman, has been on the run from various organizations ranging from frost giant armies to the Red Mages of Athay

Range: About 100 meters with magic, universal with teleportation

Weaknesses: His summons are weak to fire

Key: Base | Chosen of Auril