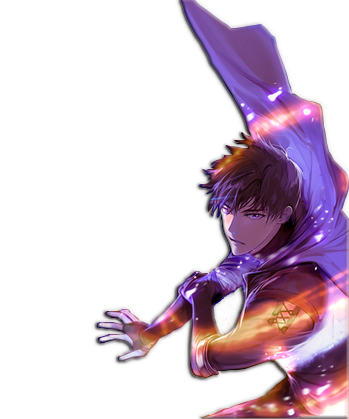 Artpe is the main character of the novel. He was once a Demon, a Heavenly King but was forced to be such by the Demon King who had Absolute Control over him. He is killed by the original Hero's Party when he defended the last dungeon but lucky for him he finds himself in the past, as a human and the childhood friend of Maetel the True Hero with him being also a Hero. With his previous memory intact he decided to defeat the Demon King and then live a carefree life as a farmer. Thus his tale begun anew.

Origin: I Reincarnated For Nothing

Level 187, Superhuman Physical Characteristics, Martial Arts, Enhanced Senses, Extrasensory Perception (Via Read All Creation and Mana Threads), Regeneration (Low - has increased regeneration via Mana), Magic, Energy Manipulation (Via Mana), Dagger and Shield Throwing (So skilled in throwing daggers and his shield as that he's better than a thief who can attack directly the opponent's weak points), Telekinesis (Via Mana Threads), Accelerated Development (As a Hero, he can learn skills from all classes; As a Hero his development it's increased as he can learn immediately Skills and Magic which in turn will boost his magical energy and body), Analytical Prediction (Via Read All Creation, Artpe can calculate the information of his targets, surroundings to formulate plans), Non-Physical Interaction (Can interact with Mana and Magical Energy via Mana Threads), Reactive Evolution (As a Hero and after he linked himself to Maetel, Artpe acquired her aptitude and talent of awakening skills and adapting to external or internal agents), Fire Manipulation (Via Hyper Rubbing which can cause ignition; Via Magic can create fireballs; Can incinerate dead monsters in a flash), Heat Manipulation (Via Mana, can increase the heat of his body, of others and dry clothes), Poison Manipulation (Via Zombie Nails that can inflict a very weak poison effect when thrown toward a foe; if infused with Mana, the poison will be strengthened), Explosion Manipulation (Via infusing Mana within objects that he will throw, depending on how much Mana was infused, the explosion can be weak or strong), Curse Manipulation (Via Skeleton Shield which can weaken the enemy; Increased effect via Infusing Mana), limited Biological Manipulation (By combining his Read All Creation with Mana Threads, Artpe can change the body of others at a fundamental level), Friction Manipulation (Via Hyper Rubbing, Artpe can cause friction so powerful that even cold water it's vaporized), limited Physics Manipulation (Via Hyper Rubbing which affects the physical World), Danmaku (Can create several hundreds of Mana Threads at once), Information Analysis (Via Read All Creation), Power Mimicry (As long the spells of the enemy use direct manipulation of magic can be mimicked with Mana by Artpe), Power Modification (Via Mana Threads, Artpe can distort the magic spells via Mana; Can also make different configurations to spells of foes; It scales to several hundreds of foes at once), Power Nullification (Can nullify other Magic Spells via Mana Threads), Creation (One can physically manifest creations if enough Mana it's used - it's only temporary), Teleportation (Via Blink Boots - can instantly travel a short distance), Dimensional Storage (Via Dimensional Pouch), Statistics Amplification (Can increase the effects of his skills, items and magic spells by infusing Mana within them), Statistics Reduction (Via Skeleton Shield), Absorption (Via Obsidiaon of Greed, Artpe can absorb curses and store them), Causality Manipulation (A Hero passively affects the World causing different effects that will somehow create maybe a dungeon, an Ancient Demon to awaken, a Legendary Magician to help them, a lucky chance in a fight, etc), Resistance to: Soul Manipulation (Every level increase the power of one's soul, a difference of one level can be fatal), Illusion Creation (Immune to Illusions via Read All Creation), Information Analysis (Via Robe), Curse Manipulation (Via Obsidian of Greed), Cold Manipulation (Via Leveling System and his level), Heat Manipulation (Via Leveling System and his level), limited Plot Manipulation (His mind resisted to the Rewrite/Revision of the story done by Maetel)

All previous powers but stronger, Level 370, Self-Sustenance (Type 3, at his level, he doesn't need to sleep), Extrasensory Perception (Can survey an entire city with Mana Threads + Read All Creation), Stealth Mastery, Underwater Breathing (Via Underwater Breathing spell), Telepathy (Talking), Flight (Restricted flight via Float spell; True Flight via Hero's Aura), Water Manipulation (Can create water), Wind Manipulation (Can control the wind), Ice Manipulation (Can freeze entire zones), Holy Manipulation (Via Hero's Aura and Hero Flash), Vibration Manipulation (Via Hypper Rubbing can control the cycle and intensity of vibrations), Corrosion Inducement (Through Hyper Rubbing, Artpe can induce corrosion on material things), Teleportation-Negation (Via Mana Threads which disturbs the magical energy on top of interfering with the physical world), Power Nullification (Can nullify at the same time tens of thousands of spells via Mana Threads as he can create this many threads; via Materialization which destroy the spells), Pocket Reality Manipulation (Can create pocket dimensions), Absorption (Can absorb the Record of Demons to recharge his Mana), Creation (Via Materialization, Artpe can change and shape each Mana Thread in a different spell), Forcefield Creation (Can create numerous Holy Barriers; via Materialization can create barriers), Teleportation (Via Wind Spirit King's Feather+4, which let him teleport through space and time even in a dimension which neutralizes teleportation), Statistics Amplification (Via Magic Staff Demite Pipi can amplify his spells; via Tome of Destruction), Social Influencing (A Hero possess charisma to a degree that it prevent others from arguing with them), Mana Pressure (Artpe can impose his Mana to make others choke, making hard to breath), Holy and Light Aura (Via Hero's Aura which defends and attack those of Demonic origin), Resistance to: Rage Manipulation and Madness Manipulation (Via Leveling System, at his level such things won't affect him), Mind Manipulation (Can resist to Regina (IRFN)'s mind manipulation that could affect thousands of humans)

All previous powers but stronger, Level 400+, Puppet Master (Can control 13 Golems at the same time, each one is stronger than him in physical and attack power), Holy Flame Manipulation (Can control the Holy Flame that it's extremely strong against Demonic foes), Statistics Reduction (Via Summons to the Demons, a bell that weakness every Demonic being and they will also feel an odd sense of loyalty toward the possessor the bell), Regeneration-Negation (Via Materialization, can stop/negate up to High-Mid), Existence Erasure (Via Record of Destruction),Conceptual Manipulation (Via Materialization, Artpe can copy Concepts and then Materialize them), Plot Manipulation (Via Rewrite/Revision), Resistance to: Existence Erasure (Resisted to the power of pure destruction of the Fragment of Destruction which erased all mater, souls and space itself), Poison Manipulation (Resisted to Demon's King Aura which was poisonous), Power Nullification (Resisted to the Fragment of Destruction which wanted to negate his spells), Beings over level 400 can resist to Absolute Control

Stamina: Very high (Fought for four days without stopping) | A lot higher as his level increased dramatically | Higher than before

Standard Equipment: Dagger, Mana Potions, Skeleton Shield (It can inflict a weakening curse), Robe (A robe that obstructs other's perception and observation), Zombie Nails (Nails that inflict weak poison; if injected with Mana, the poison potency it's increased but can only be used once on a nail), Blink Boots (It has the Ability Blink that let one to instantly travel a short distance), Dimensional Pouch (Dimensional Storage), Obsidian of Greed (A magical stone that sucks all curses and contain them) | Magic Whip (A magic whip that does not use Mana; Artpe uses it in conjuncture with Hyper Rubbing to create violent backlash. It ignores durability and thanks to its frictions, it burns the flesh), Magic Staff Demite Pipi (An artifact created by Artpe from Demite, an legendary material that amplify magic), Tome of Destruction (An artifact that boost the power of destructive type magic), Wind Spirit King's Feather+4 (After Artpe Reinforced his Blink Boots four times, they evolved thus they gaiend the Record of the Wind Spirit King which lets him teleport through space and time, even to a dimension which neutralizes teleportaion) | Unknown but colosal number of Artifacts that are used as Sacrifices, Summons to the Demons (A bell that weakness every Demonic being and they will also feel an odd sense of loyalty toward the possessor the bell)

Intelligence: Very High. Artpe it's a cunning and ruthless magician that will use any means to win a fight if necessary. He has hundreds of years of knowledge from his previous life as a Demon and thanks to his Innate Ability Read All Creation, his memorization and computation skills are incredible as he can learn dozen of magic spells at once because when one learns a magic spells, the theory behind it it's pure information and to learn a dozen it will clash but Artpe can do it.

Weaknesses: If left without mana, can't use Magic Spells.

Read All Creation: It is an innate ability that allows him to find out information about anything that exists in the world.

Mana Manifestation: Its the most basic mana technique. It let the user manipulate mana for a limited variety of effects like engraving letters into wood using hot mana.

Mana Manipulation: It's the advanced mana technique that let a character to manipulate Mana for different effects and spells.

Hyper Rubbing: An advanced technique of the Rubbing class. It's a versatile skill with a lot of effects. It can be used to make enemy joints rub against each other, used on surfaces to make it slicker than oiled steel plate.

Reinforcement: By infusing Mana within spells, skills, and items, Artpe can strengthen them at a fundamental level.

Incinerate: A spell that can incinerate dead monsters in a flash.

Cleaning: A spell used to clean clothes, bodies, and objects.

Record Link: Can share skills, magic spells, mana, attributes and even battle experience with others.

Spell Modifical Spell: A magic spell can be cast via Mana Threads to modify spells.

Underwater Breathing: A magic spell that lets one breathe underwater.

Haste: A high-rank magic spell that increases either the speed of oneself or of his skills.

Mana Restriction: A high-rank magic spell that lets one bind a target's Mana for a limited amount of time.

Holy Barrier: A skill from the Priest Class, which creates a holy barrier that blocks magical energy but can also resistant to physical attacks.

God Flush: An AOE great magic spell that uses that needs a chant to be used. It will create an enormous whirlpool that will suck everything into it. It's powerful enough that it can kill an Ancient Kraken in one-shot. Its power may be great but it's has a long chant and use an enormous pool of mana to be used.

Materialization: An Innate Ability that step in the domain of Gods. It's not a simple spell, it embodies the Spell as a shole. It let the uses to manufacture, change and shape the spells. It can also be used to destroy the spell of foes. It can also change Magic in Mana and Mana in Magic.

Float: A magic spell that let one float.

Hero Flash: A Hero Class spell that strengthens the ability of a Hero. It's Holy and Light type magic.

Hero's Aura: It creates a wing of light that lets one fly. If used with Hero Flash, it's speed will increase. It can also be used to create an aura that fights back against demonic ones and can infuse in a weapon of a spell. It's Holy and Light type magic.

Reclamation: A magic spell that returns everything, including the entire existence of something to its origin.

Record of Destruction: Using his Materialization, Artpe copied the Concept of Fragment of Destruction which it's the Hand of a Demonic God, a Concept itself that exists in another dimension thus gaining its power.

Waste Money Spell: A magic that sacrifices an Artifact to use all its power in one go.

Retrieved from "https://vsbattles.fandom.com/wiki/Artpe?oldid=5869808"
Community content is available under CC-BY-SA unless otherwise noted.