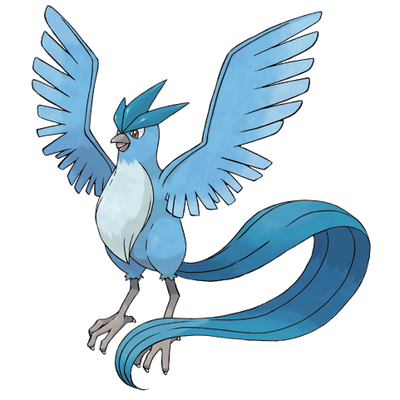 Articuno (Japanese: フリーザー Freezer) is a dual-type Ice/Flying Legendary Pokémon. Along with Zapdos and Moltres, it is one of the three Legendary Birds of Kanto.

When Articuno flaps its wings, it can chill the moisture in the air around it, making snow fall. It flies from icy mountain to icy mountain. According to legend, it appears before doomed travelers lost in icy regions. Articuno lives in cold, isolated locations, such as mountain peaks.

Attack Potency: At least Small Country level+ (Comparable to Moltres, incapacitated Lugia with the aid of Zapdos and Moltres).

Speed: At least Relativistic+, likely higher (Vastly superior to non-Legendary Pokémon like Charizard. Its Ice Beam moves at the same speed as Zapdos' lightning. Can easily dodge attacks from Zapdos and Moltres.)

Stamina: Very high (Fought its fellow Birds for a good while)

Weaknesses: Articuno is weak to Fire, Electric, and Steel Type moves and is especially weak to Rock Type moves.