VS Battles Wiki
Register
Don't have an account?
Sign In
Advertisement
in: Tier 8, Tier 8-A, Characters,
and 28 more 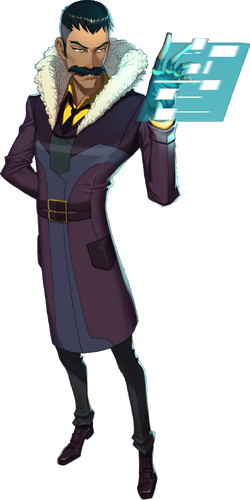 Arthur Watts is a major antagonist in RWBY. Originally a scientist working for the advancement of technology in Atlas, Watts became infuriated and vengeful when James Ironwood chose to fund the Penny Project proposed by Pietro Polendina as opposed to Arthur's own proposal. Thought to have perished in an incident involving the testing of Atlesian Paladins, Watts secretly allied himself with Salem, and became the brains of their outfit. Having designed and programmed the Mantle security grid himself, Arthur becomes instrumental in the Atlas portion of Salem's plan.

Attack Potency: Multi-City Block level (Fought James Ironwood to a near standstill, though he was ultimately weaker)

Speed: Massively Hypersonic (Kept up with Ironwood in close quarters and was able to tag him with his bullets)

Durability: Multi-City Block level (Took hits from Ironwood even without his Aura), higher with Aura (Aura functions as a forcefield with accumulative durability, depicted as a 'health bar', that allows him to take dozens of hits from opponents as strong as himself without any significant injury)

Stamina: Superhuman (Held his own against Ironwood in prolonged one-on-one combat)

Intelligence: Extraordinary Genius (Watts is a masterful scientist, specializing in the fields of computer engineering, mechanical engineering, anatomical engineering, espionage, guerrilla warfare, and security systems. He is credited with creating almost everything that exists in Atlas, the most technologically advanced city in the world, in one way or another, with some of his most notable achievements being Mantle's security network, Dust-based environmental control, and the Atlesian Paladins. Arthur's main role in Salem's group was the manipulation of technology, developing viruses such as the one used by Cinder to hack into the CCT tower, allowing her to control communications and even aspects of the Vytal Festival's tournament. His expertise in virus creation was seen again when he installed a chip in a sword stolen from Penny Polendina that was able to transmit a virus to command her to open the Atlas Vault and ultimately self-destruct. Watts' acumen in technology and computer systems, along with rings on almost every finger, allowed him to synchronize an array of Scrolls to hack into the Atlesian security systems, permitting Watts to remain mobile and difficult to locate, playing into his pragmatic and strategic mindset. He was also able to frame Penny for the murder of several Mantle citizens by manipulating the recordings of her fight against Tyrian. He was also able to give Tyrian a new stinger after his old one was cut off by Ruby, displaying prowess in biomechanical engineering. The new stinger and tail that he constructed didn't appear to inhibit Tyrian's production of venom, but rather use it, with the addition of making the actual stinger itself retractable, while the segments to the tail seamlessly mesh with the organic base's flexibility and range of motion. In direct combat Watts' fighting style is very methodical, keeping track of the number of shots fired by himself and his opponents. He possesses some skill in close quarters fighting, briefly defending himself against James Ironwood's attacks while landing a few blows in return. Watts, like Roman Torchwick, and Mercury Black, is notable for being one of the rare active fighters that succeeded without ever discovering their Semblance)

Weaknesses: Continual damage to his Aura will cause it to decay to the point where he can be left open to more significant damage. Aura's durability is cumulative; it will deplete with each attack he takes and can be brought down by characters of similar strength. Constant exposure to extreme temperature can drain the user's aura.