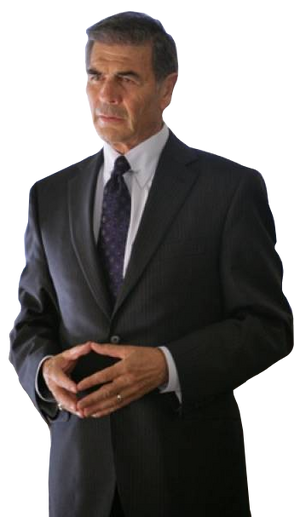 Tier: 9-B physically. 9-A with Pyrokinesis, Unknown with Electricity Manipulation, At least High 7-C with Radiation Manipulation, likely much higher

Powers and Abilities: Power Absorption (Any EVO he touches loses their acquired abilities on physical contact with him, while he gains them), Superhuman Physical Characteristics, Immortality (Type 1, 3, and 4), Regeneration (Low-Mid. This also includes regeneration from brain damage as long as it doesn't harm a specific area in his head), Electricity Manipulation, Poison Manipulation (Can emit a poison in an area around him that kills people within seconds), Telekinesis, Mind Manipulation/Dream Manipulation (Locked Angela Petrelli in her own dreams.Trapped Matt Parkman in Angela's head, and somehow made a wound he gave him in her mind appear in reality), Memory Manipulation (Erased nearly a decade of Hiro Nakamura's memories), Teleportation, BFR (Sent Claire across space and time without moving himself), Time Manipulation (Includes Speeding/Slowing Time and Time Travel), Limited Precognition (Can make prophetic paintings that predict future events, as well as dream of future events), Power Mimicry, Flight, Radiation Manipulation, Information Analysis, Invisibility, Intangibility, and Fire Manipulation, Resistance to Disease Manipulation (Claire's power prevented her from being sick her entire life), Poison Manipulation (Gaining Adam Monroe's power cured him of a poison that left him crippled, and he, like Maya, is unaffected while generating a lethal poison), and Mind Manipulation/Memory Manipulation (Engaged The Hatian, who struggled to his his powers on him, in a mental battle that left the man incapacitated while he attempted to stop Arthur from using his powers. Even then it appeared Arthur would have won this battle if he was not shot by Sylar)

Attack Potency: Wall level physically (Absorbed Peter's superhuman strength and durability, which was copied from Nikki Sanders, who was capable of ripping people in half, tear doors off their hinges, breaking necks, and removing/swinging a pay machine for parking), Small Building level with Pyrokinesis (Stolen from Peter, whose ability is superior to Meredith, who could cause a massive explosion that took out part of the Primatech Research Facility), Unknown with Electricity Manipulation (Absorbed from Peter who replicated Elle's ability, who can cause blackouts in an entire research facility and overload the electricity of a plane), At least Large Town level with Radiation Manipulation (The same ability as Peter and Sylar, the later of which destroyed Costa Verde when he lost control of his powers)

Speed: At least Massively Hypersonic (Absorbed Peter's superhuman speed, which was replicated from Daphne, who could move fast enough to counter Hiro's time slow. To her, seconds felt like hours, and she should run from Tokyo to Paris in the time it took for detectives to arrive at the office Hiro worked at)

Lifting Strength: Peak Human physically (Comparable to Peter/Nikki, who can send people flying with kicks and pull out a parking payment machine and use it as a weapon), Class 5 with Telekinesis (Has the same ability as Sylar, who can casually flip a moving van)

Striking Strength: Wall Class (Has the same power as Peter/Nikki)

Durability: At least Wall level (Can take hits from Peter/Sylar and, like Nikki, should take no damage from using his abundant strength)

Stamina: Extremely high due to his regeneration. It took the combined efforts of The Hatian, Peter, and Sylar to actually incapacitate and kill

Intelligence: Gifted. He is a cunning and ruthless businessman who is also a trained soldier, and was able to run the operations of various faux enterprises that dealt in crime all while staying beyond the reach of authorities. Genius with Intuitive Apitude (The same ability as Sylar's)

Weaknesses: His regeneration can be stopped if a specific, microsopic part of his brain is damaged/blocked, or if he receives significant cranial trauma. If his powers are removed, he may age or go back to his crippled state similar to Adam Monroe