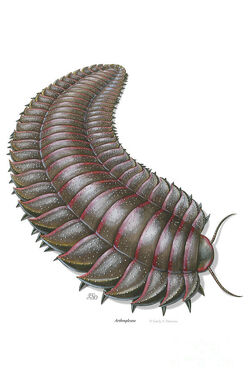 Arthropleura (Greek for jointed ribs) is a genus of extinct millipede arthropods that lived in what is now northeastern North America and Scotland around 315 to 299 million years ago, during the late Carboniferous Period. Arthropleura ranged in length from A. moyseyi, which was only about 0.3 metres long, to A. armata which was 2.5 metres long. Arthropleura was able to grow larger than modern arthropods, partly because of the greater partial pressure of oxygen in Earth's atmosphere at that time and because of the lack of large terrestrial vertebrate predators. The flattened body of Arthropleura is composed of approximately 30 jointed segments, each of which was covered by two side plates and one center plate. The ratio of pairs of legs to body segments was approximately 8:6, similar to some present-day millipedes.

Attack Potency: Varies; Below Average level (The smallest species of Arthropleura was comparable to large modern-day millipedes) to Wall level (Even though it is a Detritivore, a full-grown Arthropleura had no Predators. Much stronger than Meganeura and Pulmonoscorpius which can hurt/kill large Carboniferous Amphibians)

Retrieved from "https://vsbattles.fandom.com/wiki/Arthropleura_(Real_Life)?oldid=6375253"
Community content is available under CC-BY-SA unless otherwise noted.