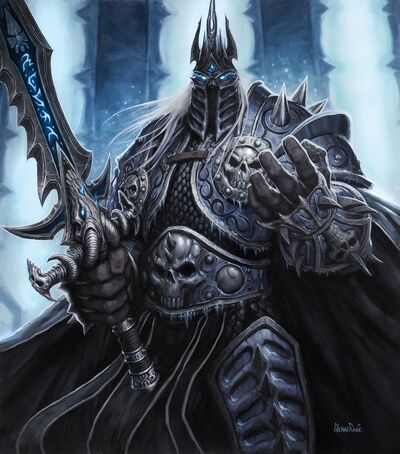 Arthas Menethil was the son of King Terenas Menethil and Queen Lianne Menethil and crown prince of Lordaeron. He used to be a paladin and one of the best soldiers in the kingdom.

The events of the Third War between the Alliance and the Orcs drove him to abandon his idealistic stance in favor of purging the plague of undeath caused by Ner'zhul. Causing him to find the sword Frostmourne, which consumed his soul and turned him into a Death Knight. When he went back to his kingdom, he murdered his own father and his own people.

Later on he merged with Ner'zhul, turning him into the Lich King. Years later, he was defeated by Tirion Fordring and his warriors.

Attack Potency: At least City level (Defeated a metamorphosed Illidan Stormrage while in a weaker form himself. Grew vastly in power after obtaining the Helm of Domination and becoming the Lich King)

Speed: At least Subsonic (Kept up with Illidan during their fight in Icecrown)

Striking Strength: At least City Class with Frostmourne (Was capable of severely wounding Illidan with his runeblade during their fight. Grew vastly in power after becoming the Lich King)

Stamina: Extremely high (Being undead he doesn't need to rest)

Range: Standard melee range. Tens of meters with most spells and abilities. At least several kilometers, possibly planetary, with Teleportation. Planetary with telepathy and clairvoyance.

Intelligence: Above average. Arthas was an experienced commander and diplomat, he was hailed as one of the finest swordsmen in Lordaeron while he was still human. Once he donned the Helm of Domination and became the Lich King, Arthas obtained all of the powers of Ner'zhul, the previous master of the Scourge, which included the ability to expand ones' consciousness by capturing and enslaving the souls of the dead under his will.

Weaknesses: Holy magic to an extent. When a soul has been devoured by Frostmourne, Arthas' father, King Terenas, will attempt to resurrect the fallen spirit from the inside of the runeblade potentially restoring the newly consumed soul back to life. However, Terenas was only allowed to do this while the Lich King was testing the heroes of Azeroth. Once the Lich King had completed his test, Terenas was incapable of reviving any of the fallen heroes.

World of Warcraft: Wrath of the Lich King abilities