VS Battles Wiki
Register
Don't have an account?
Sign In
Advertisement
in: Tier 7, Tier Low 7-B, Tier 6,
and 41 more 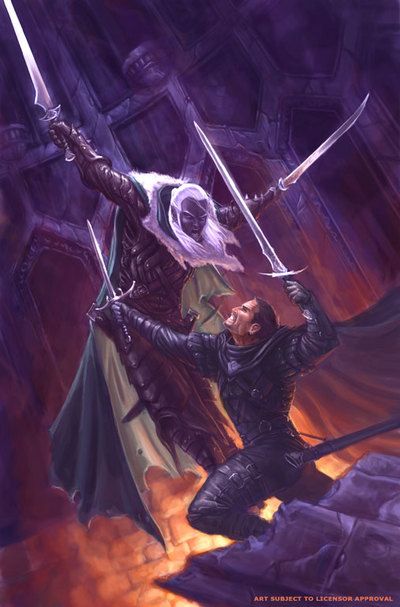 Artemis Entreri is ruthless and cunning assassin in Faerun, and among the most sought hired killers across the Forgotten Realms. He served as an arch-nemesis for Drizzt Do'Urden and the Companions for quite some time, taking actions against the party including kidnapping Cattie-brie, Regis, and Drizzt's companion, Guenhwyvar.

Artemis bore a dreadful early life, experiencing sexual abuse and poverty. Eventually, his mother, a prostitute in Calimshan, sold him to a traveling merchant, which led Artemis to wind up in Calimport. By this point, Artemis' emotions had been all but blocked, with his psychology becoming fractured at the betrayal by his mother. In Calimport, he quickly escaped his owner, and discovered the Thieves' Guild ruled by Pasha Basadoni- here, even at a young age, Artemis flourished and became the greatest assassin in Calimport, perhaps even in all of Faerun.

Artemis clashed with (and assisted) Drizzt and his Companions extensively, having come close to killing them countless times. He was particularly interested in combatting Drizzt to discover which of them was the better swordsman- for Artemis was no ordinary assassin, and instead preferred open duels. During his life, he was responsible for the deaths of many important individuals across the Realms, including Sylora Salm, Berellip Xorlarrinm, and presumably the Netherese survivor Herzgo Alegni.

As a general description- Artemis is described as being small, with "not an ounce" of body fat on his form. His hair is raven black, his cheek bones high- and his eyes grey, devoid of life. These are said to be a mirror of his existence- Artemis feels no emotion, and bears no ability to find satisfaction in life.

Powers and Abilities: Superhuman Physical Characteristics, Weapon Mastery (Artemis is one of the most skilled swordsmen and assassins in all of Faerun, arguably amongst the greatest mortals in such areas), Stealth Mastery (Artemis is capable of blending into and infiltrating any society or group, a skill he uses often), Enhanced Senses (Artemis is more than capable of fighting whilst blinded or ambushed), Acrobatics (Particularly skilled in tight-rope walking, among others), Social Influencing (Uses manipulation mid-combat to create tactical opportunities for himself- raging foes make mistakes), Soul Manipulation, Absorption and Statistics Reduction via Life-Stealer (Life-Stealer weapons drain the levels of enemies, and heal their wielders; Artemis bears one of these items as a dagger), Non-Physical Interaction (Can affect intangible, incorporeal, abstract, conceptual, and purely nonexistent enemies), Blood Manipulation (Bears a Sword of Wounding, which causes supernatural bleeding that drains one's constitution), Statistics Amplification (Bears several items to enhance his armor magically, causing him to become more dextrous and durable), Information Analysis (Artemis is an exceptional judge of an enemy's skills and capabilities, and is quickly able to discern their combat-oriented skills), Preparation, Invisibility (Is tattooed with magic that grants him the ability to become invisible), Camouflage (Expert in disguise), Extrasensory Perception (Artemis can detect poison in his presence), Poison Manipulation (Though he prefers not to use it, Artemis is adept at usage of poison), Death Manipulation (Bears the Assassin's magical ability to instantly kill a target with a single strike), Surface Scaling (Wears a Cloak of Arachnida, which allows one to constantly be under the effects of the Spider Climb spell), Thread Manipulation (The Cloak of Arachnida allows the user to cast web, entangling enemies), Smoke Manipulation (Could use Charon's Claw to create a wall of ash to block enemy vision), Light Manipulation (Charon's Claw can exude a dark glow), Disease Manipulation (Charon's Claw bestows festering wounds that would eventually become infected), Resurrection (Charon's Claw can resurrect Artemis), Heat Manipulation (Charon's Claw renders Artemis invisible to infrared vision), Memory Manipulation and Empathic Manipulation, Self Only (Wielded Idalia's Flute, which allowed him to clear his thoughts but would drudge up old memories), Summoning via Nightmare Figurine (Allows Artemis to summon a Nightmare from the Lower Planes to serve as his steed), Longevity, possibly more (Artemis is Half-Shade, meaning he could bear the abilities of a Full-Shade, which include Light Manipulation, Teleportation, Attack Reflection, Regeneration (Low-Mid), Darkness Manipulation, and Dimensional Travel), Extreme Resistance against Disease Manipulation (Artemis wears a Periapt of Health, rendering immune to all magical and non-magical diseases) and Poison Manipulation (The Cloak of Arachnida grants him enhanced resistance against poisons)

Attack Potency: At least Small City level+ (Listed as being considerably superior to the likes of legendary dragons), possibly Island level+ (Comparable to Drizzt Do'Urden, who has fought and killed Balors, though he has lost against him before; has supposedly been sent to assassinate and kill liches and even dracoliches in the past, namely Kazmil-urshula-kelloakizilian)

Speed: At least FTL (Superior to lower-level individuals capable of fully dodging spells such as Anger of the Noonday Sun)

Stamina: Superhuman, Artemis constantly trains and fights, leaving little time for rest- he has endured multiple treks through cold mountains in limited time where all others have succumbed to the weather and lack of food

Range: Up to hundreds of meters, possibly multiversal with Shade abilities

Standard Equipment: Longsword (or Saber) of Wounding, Life-Stealer, Cloak of Armor, Ring of Protection, Life-Stealer, Charon's Claw, Cloak of Arachnida, Periapt of Health, Nightmare Figurine, Bolero, Belt-Buckle Knife, Fingernail Lockpicks (as in, he can cut off his finger nail from his thumb and use it as a lockpick), previously Idalia's Flute

Intelligence: Genius, incredibly adaptable to new fighting styles and often only needs to witness a new technique before adapting it to his own and improving his mastery over the blade; expert infiltrator capable of getting into any type of character to gain an advantage over his enemies; furthermore skilled in all manner of abilities, including interrogation, tracking, disguise, disabling traps, navigation, and many others; has outsmarted battle-mages in the past

Weaknesses: Bears an incredibly damaged psyche due to his childhood, and often is seen to have no emotions as a result