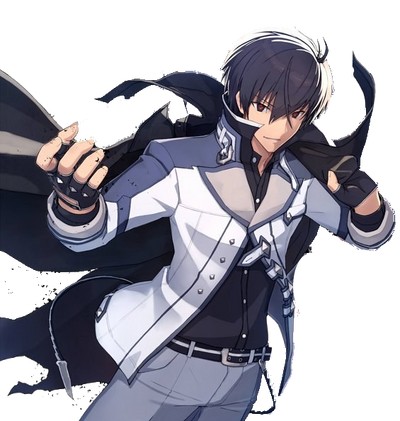 Arnos Voldigod is the main protagonist of Maou Gakuin No Futekigousha. He is the demon lord of 2000 years ago who reincarnated into the present.

Powers and Abilities: Superhuman Physical Characteristics, Extrasensory Perception (Can sense the flow of magic power), Light Manipulation, Flight, Longevity (Demons have long lives), Fear Manipulation (Can cause people to feel fear just from his words or with his magic power), Body Puppetry (His words can compel others to follow his orders), Deconstruction (Can cause whatever he looks at to disintegrate with the demon eyes of ruin), Enhanced Senses (Can see the blood inside others, can see and hear things far away), Mind Manipulation (Can disintegrate his opponents mind with the demon eyes of ruin), Fusionism (Can fuse magics together), Aura, Immortality (Types 2, 4, and 8 Was still alive alive despite having his heart crushed. Can reincarnate when he dies. Can resurrect as long as his origin which exists within his soul exists), Memory Manipulation (Can recall the distant and far off memories of others. Can share his memories with others), Paralysis Inducement (Can paralyze the senses of others by emitting his magic power), Death Manipulation (Can kill those who sense his magic power), Magic (Has mastered almost all magic), Regeneration (Low-Godly; Even if his body is destroyed, the origin which exists within the soul and is also the source of magic power, will remain. Those who have mastered magic can use it even if only their origin remains. That’s why it’s possible to resurrect even from there. Which is why if he is dead for less than 3 seconds he can revive himself), Non-Physical Interaction (Can affect the origin of others which exists within the soul. Can affect rumors and legends), Sleep Manipulation (Can cause people to sleep by looking at them with the demon eyes of ruin), Creation (Can produce things that already exist in the world. Can create new magic), Soul Manipulation (Can destroy the origin of others which is the source of magic power that exists within the soul), Illusion Creation (Can create illusions), Body Control (Can control his own growth, such as when he made his body 10 years older), Healing, Power Nullification (Has an always active anti-magic field around him. Disturbed the magic flow around Sasha so she couldn't fly. Can destroy magic with his Demon Eyes of Ruin, making it the ultimate anti-magic ability), Explosion Manipulation (Caused the magic power of 80 people to go out of control, resulting in them exploding), Genius Intelligence, Necromancy, Fire Manipulation, Time Stop (Can stop time for a moment), Sound Manipulation (Can infuse magic power into his heartbeat allowing him to kill anyone who hears it from the inside out), Telepathy (Can share his thoughts with others and read minds), Dimensional Travel (Can attack across dimensions, and also connect dimensions together and also cross dimensions himself), Resurrection (Can resurrect anyone who has died within 3 seconds and also himself), Teleportation, Conceptual Manipulation (Type 3; With his principle destroying sword he can destroy all things in creation. Whether it be destiny, providence or a miracle. No matter how strong, eternal or infinite Venuzdonoa destroys them all. Reason doesn't exist before Venuzdonoa hence it broke a space completely isolated from the world which makes it impossible to interfere from the outside, avoiding Venuzdona is useless as avoiding it doesn't mean you avoided it, spamming a lot of decoy gates and escaping in one of them, is also useless as the reason that if he didn’t cut them all they couldn’t be cut, also doesn't exist as Venuzdona destroys it), Time Travel (Can do a limited journey in time 2000 years into the past. Can travel back in time, and send his attacks back in time), Clairvoyance, Curse Manipulation (Cursed Emilia to be reborn as a mixed-blood until the end of time), Resistance to Deconstruction (Unaffected by Sasha's demon eyes of ruin which causes whatever she looks at to disintegrate), Sleep Manipulation (Unaffected by Sasha's demon eyes of ruin which can cause people to sleep), Space-Time Manipulation (Was unaffected by a time stop. With his bare hands he stopped an attack which ruptured time-space),

Attack Potency: City level (His clash with Ray caused a mountain to vanish, and also blowing away the clouds. Superior to Gaius who can split mountain ranges in two. After finally getting used to his body after reincarnation, he fully regained the strength he had before, making him 10x stronger), High Universe level with Venuzdonoa (Venuzdona can destroy all things in creation, no matter how strong, eternal or infinite they are. Venuzdonoa doesn’t follow reason nor anything number related as anything that can be reasoned returns to nothing before it, hence it's useless to think about what it can or can't do)

Speed: Subsonic (Can move faster than the eye can see)

Range: Hundreds of Kilometers, Universal with Venuzdonoa (Venuzdonoa was able to manifest inside an isolated dimension because it doesn’t follow reason nor anything number related or things related to distance whether it be magical or conventional. Anything that can be reasoned returns to nothing before it)

Intelligence: Genius (Memorized and learned a complicated magic formulation with one look which took Sasha 1 month to learn. Arnos then proceed to complete the formula which even the creator wouldn't have been able to do for another 1000 years. Deciphered hundreds of thousands of magic characters with one look which would take an accomplished mage a whole day to do. Is knowledgeable about the atomic structure of objects, as when he uses his creation magic such as to create a stone, he doesn’t just create the stone but also the atoms that make up the stone)