VS Battles Wiki
Register
Don't have an account?
Sign In
in: Tier 9, Marvel Comics, Comic Book Characters,
and 23 more 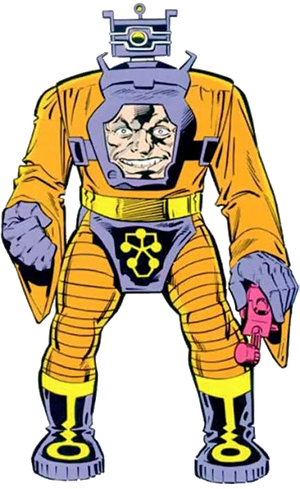 Brilliant Nazi geneticist Dr. Arnim Zola transferred his mind to a mechanical body to live forever, and now continues his war against freedom with the help of his clones and bio-servants, making him a persistent thorn to Captain America.

Powers and Abilities: Superhuman Physical Characteristics, Inorganic Physiology, Energy Projection (As shown here), Extremely Limited Mind Manipulation (His ESP box can control any non-natural organisms as well as perform mindblasts), Immortality (Types 1 and 6; Can switch to his backup bodies), Flight (As shown here), Information Analysis (Can scan objects on a cellular level). Additional Equipment grants him Limited Possession (Can possess his own creation) and Organic Material Manipulation (As shown here)

Intelligence: Extraordinary Genius (Arnim Zola is considered one greatest genetic engineers in history, a biochemist whose knowledge of genetics was enhanced by his study of Deviant science, alongside that, he was able to build a functioning robot body with the limited technology of the 1940s.

Standard Tactics: Zola is a noncombatant when confronting his opponents, often relying on his bio-servants to fight for him. When confronted alone however, Zola is quick to resort to the defenses built into his system like the mind blasts as well as using his strength against his foes.