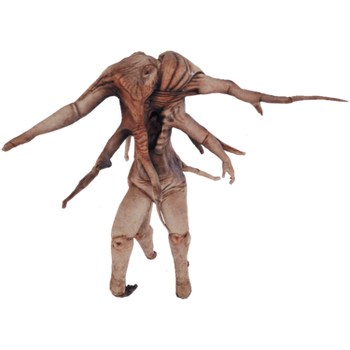 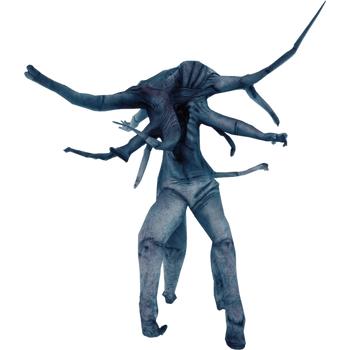 The Armsy is one of the Creepy Mutants in The Forest. Armsy is suggested to have been created by Sahara after a small boy had been put in the Resurrection Obelisk, resulting in the child becoming malformed and developed multiple appendages, facial distortions, and high aggression. As seen in the Orientation Slideshow, he is called "Subject 82C6", with "Armsy" being six years old at the time of his mutations, with his name likely being a nickname issued by the staff. According to the slideshow, he developed multiple limbs, which is stated to be a "sibling anomaly", suggesting that Armsy might be more than one child fused. At some point during the laboratory's active research phase, an Armsy broke free of containment and began attacking and killing the scientists nearby. As Megan Cross was present at the time, this incident is likely what lead to Megan's death.

Gender: The first Armsy was a small boy, but it's Unknown what gender the other Armsy are.

Powers and Abilities: Superhuman Physical Characteristics, Immortality (Type 7, the Mutants are undead beings), Resistance to Poison Manipulation (Can tank Eric's poison arrows without dying), Madness Manipulation (Unaffected by the caves, which can drive the player insane), Pain Tolerance (The average arrows one shot most cannibals when you hit them yet the Armsy can tank around 20 arrows)

Intelligence: Low (The Creepy Mutants seem to be completely animalistic, with only attacking the Player)