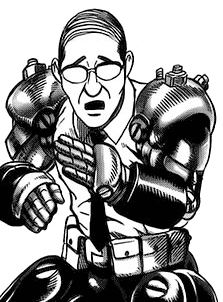 He is shown arriving to help defeat Surprise Attack Plum, but arrives too late as the monster is already defeated.

He is also shown on Tatsumaki's day off about to fight the Mysterious Being Hotdog, before Tatsumaki proceeds to annihilate the latter and leave the area.

Attack Potency: Small Building level (As a C-Class hero should be superior to a regular cop)

Speed: Unknown, possibly Superhuman (Might be comparable to other C-Class heroes; hasn't exhibited any speed feats, as his only shown fight was ended by Tatsumaki before he could act)

Weaknesses: Likely has stomach problems or heartburn, as he took medicine before his fight with Hotdog

Retrieved from "https://vsbattles.fandom.com/wiki/Armored_Chief_Clerk?oldid=6492071"
Community content is available under CC-BY-SA unless otherwise noted.