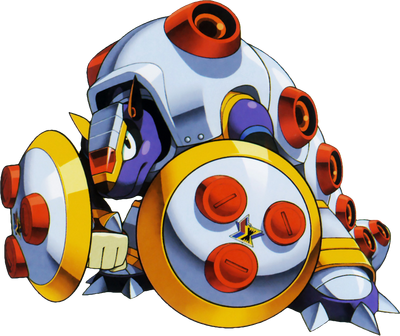 Armored Armadillo was the former leader of the 8th Armored Division of the Maverick Hunters, serving under Sigma. Being a very loyal individual, when Sigma turned Maverick, Armored Armadillo followed his leader against the other Reploids, only wishing to follow his orders. He was eventually destroyed after battling with Mega Man X.

Attack Potency: Solar System level (Capable of fighting and harming X. Should be comparable to Storm Eagle, who fought against Sigma, but was ultimately defeated)

Speed: Massively FTL+ (Was able to keep up with X, though is likely inferior to him)

Lifting Strength: At least Class T (Should be comparable to X)

Intelligence: As a top Maverick Hunter and leader of the 4th Land Battalion, he is extremely capable in combat, able to use his large body size and his oil and fire attacks to his advantage. However, he tended to have the mindset of using firepower to counter anything in his way

Weaknesses: Due to the majority of his armor being powered by electromagnets, a good electric attack will short out the magnets and cause his armor to fall off