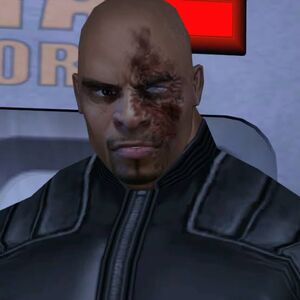 Armitage Rook is a major antagonist in the James Bond video game, 007 Nightfire. Rook works for Rafael Drake and is head of his security team for Phoenix International. Standing at 6'6, Rook is known for being a physical enforcer and an excellent henchman before being killed by Bond in Phoenix International's underground shuttle hangar.

Tier: 9-B, at least 9-B with the Samurai and Grenade Launcher

Attack Potency: Wall level (Is supposedly a physical match for Bond). At least Wall level (The samurai and rocket launcher are comparable to the golden gun which can one shot Jaws)

Speed: Superhuman with Supersonic reactions (Comparable to Bond and those who can dodge and back flip over high speed bullets) Speed of Light with the samurai

Lifting Strength: Class 1 (Is physically at least comparable to Bond)

Durability: Wall level (Comparable to Bond. Survived a plane crash with only a scar over his left eye. Also withstood multiple grenades and bullets)

Stamina: Peak Human (Kept acting out his duties shortly after the plane crash. Comparable to Bond who can fight while heavily injured)

Range: Standard Melee Range on his own. Tens to hundreds of metres with firearms, lasers and grenades

Intelligence: Gifted. While not as clever as Bond, he's still an incredibly skilled henchman who is also in charge of assault teams for Drake.

Weaknesses: None notable aside from possible anger issues.