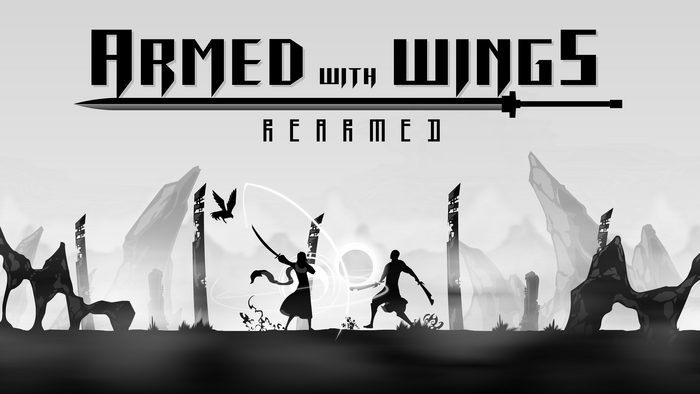 Armed With Wings is a free flash game on Newgrounds created by Daniel-Sun. It's a unique platformer with elements of a puzzle game and a stealth game at once, since you can not only fight enemies with your sword, but also send out your eagle to solve a variety of difficult puzzles and distract enemies as you venture through the lands to reach and face the evil ruler himself. The game, and all of its successors, are also made in a mostly black and white distinct art style, reminiscent of shadow theater. The game has become highly popular and spawned several sequels and a prequel, Red Moon.

There is a world, not unlike ours, but not quite like ours either. In this world, reigns an evil tyrant going by the name of Vandheer Lorde. Five years ago, an army of rebels stood up to defeat the king. They failed, and were all slaughtered.

But now, one of the rebels finds himself coming back to life. He has become Armed with Wings, the avatar of Blackmist, divine matter that composes all beings of this world. Armed with Wings is one being in two - a man, and an eagle. With this new power, he now has another chance to defeat Vandheer Lorde once and for all.

While not necessarily the strongest verse at first glance, Armed With Wings has no shortage of powers shared among its more powerful individuals, who tend to average around Multi-CIty Block level. In addition, the presence of certain top-tier characters such as Network and the eponymous Armed With Wings bring the overall verse up to at least Universe level.

Armed With Wings takes place in an alternate reality composed entirely of a substance called Blackmist. All material objects, including living things, are composed of it and dissolve into Blackmist vapor when killed. While it appears that Blackmist is simply a form of supernatural matter, it would be more accurate to describe it as a sentient, benevolent cosmic force that shapes itself into its own creations, acting as the world’s god and the world itself. In this world, supernatural abilities are common to the strongest warriors, and various dark creatures roam the wilds.

When particularly malevolent forces begin taking hold of the world, Blackmist eventually begins manifesting its power in certain individuals it deems worthy, turning them into powerful angelic messiahs capable of great feats. These individuals are referred to as Armed With Wings.

Start a Discussion Discussions about Armed With Wings