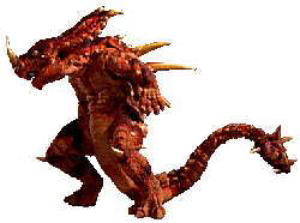 Guardian of the delicate and fragile ecological balance, Armadon was the last of the dino-beasts to emerge from his subterranean confines. Connected with Urth's life force and energy flow, Armadon ascended to save the planet from the dino-beasts who wanted ultimate control over it. Ironically, the battle for power raging among the beasts has caused a nearly irreversible terminal imbalance on the planet they are fighting to rule. Unable to tolerate the titans' destruction of the planet, Armadon's mission is to put an end to the battle for supremacy and the immense devastation caused by it.

Age: At least millions of years old, likely much older, as Armadon's ending in the unreleased Primal Rage 2 implies he is the oldest of the gods

Powers and Abilities: Superhuman Physical Characteristics, Empathic and Morality Manipulation (Any human that witnesses a Draconian will be compelled to serve and worship it if they are not already in service to another), Telepathy (Can share thoughts with his shaman and give them telepathic orders), Immortality (Types 1 and 3), Regeneration (Unknown level, Can recover from any wounds not inflicted by another god, and it is unknown if even other gods can permanently kill him via conventional means.), Electricity Manipulation, Telepathy, Dream Manipulation, Immense resistance to Magic and Soul Manipulation (It is revealed that Vertigo always has trouble with Armadon due to her sorcery being incredibly ineffective against him)

Attack Potency: Multi-Continent level, possibly higher (Comparable to characters such as Blizzard and Diablo, Linked to the Urth itself, Created Neo Urth by fighting with the other gods. Fought against and damaged Necrosan)

Speed: Massively Hypersonic (As the "God of Thunder", Armadon has vast control over lightning and electrical currents, allowing him to use them to attack his foes.)

Stamina: Immense, as he is tied to the Urth itself

Range: Several meters with most attacks, much farther with electrical attacks, planetary with telepathy

Intelligence: Incredibly high, as he is linked to the Urth itself and is aware of everything happening to and on it.

Weaknesses: Due to being telepathically linked to Urth, significant damage to the planet causes him great mental pain.

"For over a million years, Armadon had lived peacefully in his cave beneath the Earth's crust, telepathically linked to the biomass. The Cataclysms and the battles for supremacy over the changing planet tortured him, so he rose up to settle things once and for all. Now that the threat has passed, he settles down into the ground to enjoy some well-deserved rest. The land is scarred, but calm. At least for now..."

Armadon stands victorious after his long battle to stop the other beasts from tearing Urth apart.

Armadon on the cover of issue three of the Primal Rage comic miniseries.

Armadon's followers make a noble sacrifice so that their god may end the dino beasts' power struggle and preserve the planet.

Armadon as he appears in Primal Rage II.
Add a photo to this gallery