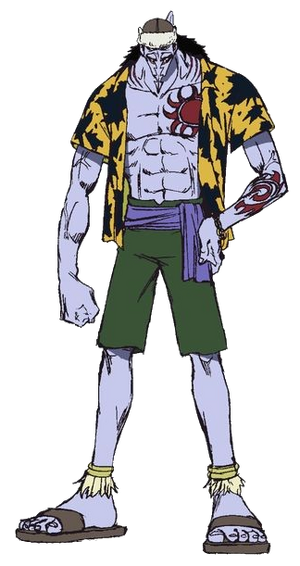 Arlong the Saw is a Sawshark Fishman, older half-brother of Madam Shyarly and the captain of the Arlong Pirates, who is very prejudiced towards humans. He was a former member of the Sun Pirates, but after their captain Jinbe ​​became one of the Seven Warlords of the Sea, he broke off, taking his former crew with him, and searched for easy targets in the relatively tame East Blue. There, he and his crew enslaved Nami's home island and forced her to work for them as a cartographer, after killing her surrogate mother Bellemere. With her cartography skills and his connections with the Marines allowing him to operate under the radar, Arlong's plan was to turn the East Blue into his own personal empire. He was the main antagonist of the Arlong Park arc.

Arlong and the rest of his crew were imprisoned after the Straw Hats put an end to his reign. Hatchan was the only one to escape. Prior to his capture, his bounty was 20,000,000 Berries, the highest bounty in the East Blue before being defeated by Monkey D. Luffy.

Like many other One Piece characters, he has his own unique laugh, which is "Shahahahaha".

Powers and Abilities: Superhuman Physical Characteristics, Skilled Swordsman, Underwater Breathing (Type 2), Limited Regeneration (Mid-Low as he can regrow all of his teeth near-instantly), Natural Weaponry (Razor Sharp Teeth and Nose), Rage Power (When angered, his eyes take on an appearance similar to those of Sea Kings. While in this state, both his strength and his speed grow exponentially, making him far more dangerous than previously stated), Statistics Amplification (When submerged Fishmen gains their natural strength and their speed is doubled. As a Shark Fishman, each time his teeth is shattered and regenerate, it is stronger and more durable than before), Expert Swimmer, Limited Water Manipulation (Can use an attack similar to the Uchimizu technique of Fish-Man Karate where he can utilizes a handful of water from his webbed hands as deadly projectiles)

Attack Potency: Large Building level+ (Could match and fight roughly on par with Luffy in combat)

Speed: Hypersonic+ (Kept up with Luffy and can throw water so hard it impacts like shotgun bullets), significantly faster underwater

Lifting Strength: Class M (Picks up a building and slams it into another. Stronger than Hatchan)

Durability: Large Building level+ (Although Luffy unleashed most of his techniques and forced Arlong back, he was mostly unfazed after each attempt and withstood them)

Intelligence: Skilled and experienced combatant (Used to sail the grand line with Jinbe), very cunning and manipulative, good with money (And obtaining it illegally), has an eye for talent in people who can help him.

Weaknesses: Weaker on land than in the water as he cannot fight at his full potential unless he is in his natural habitat. If his gills are blocked he can't breathe underwater. The same way if air enters his gills he'll suffer of drowning.