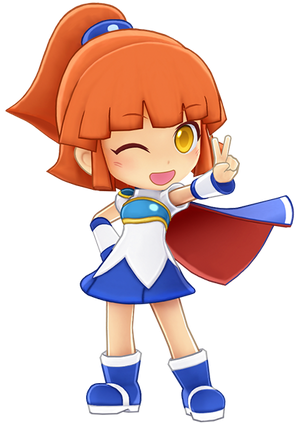 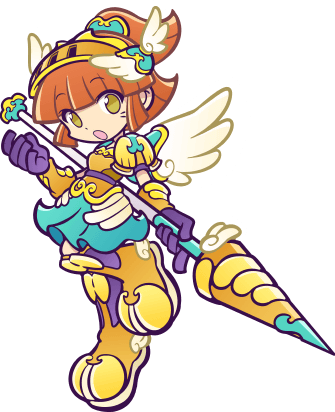 Arle Nadja served as the main protagonist of the Madou Monogatari and Compile-era Puyo Puyo. Arle is a young wizard who travels the land with her pet rabbit-thing: Carbuncle, having encountered many foes on her way. Arle was often the target of Satan's affections despite her many rejections towards him.

Sleep Manipulation (Via Quiet Sleep Flute), Light Manipulation (Light Gem), Flight (Limited flight with Parachute; true flight with Fairy's Feather), Earth Manipulation (The Elephant King Bracelet allows her to create earthquakes, though its use is situational), Vibration Manipulation (via Elephant King Bracelet), limited Forcefield Creation (via Spirit Tiara), Size Manipulation (the Toy Elephant allows Arle to shrink down and enter small holes), Damage Boost (via Magic Rings and the Pichi staff), Healing (via the Miho staff), Death Manipulation (the Rofu staff may kill enemies at random), Magic Restoration (the Papo staff and Momomo Sake can restore Arle's magic power), Sealing (In the Genesis version of Madou Monogatari I, can use A-capsules to capture weakened enemies and use them in battle), Summoning (via Puyo cards), Soul Manipulation (Can summon a grim reaper that will harvest an enemy's soul), Energy Absorption (Via Absorbing Elephant), Creation (Can create walls via Wall Foundation item), Energy Projection (Via Magic Gun), Transformation (the Seraphim Orb allows Arle to transform into her Valkyrie form), Resurrection (via Seraphim Orb), Energy Boost (The Momomo Sake was likened to a modern energy drink. The Rei staff cuts Arle's mana usage in half), possible Reality Warping (The Seraphim Orb allows the user to bend reality to his or her whim; however Arle either rejected the power or hasn't tapped into most of its power), and Resistances to Magic (The Ruler's Mantle can provide resistance to divine magic such as that of the Phantom God), Heat Manipulation and Ice Manipulation (the Spirit Tiara allows the user to survive extreme heat and cold)

All of Base Arle's abilities (excluding items) plus Acausality (Type 4; was stated to be an exception to the cycles and causal laws created by The Creator) and possibly Immortality (Type 1)

Attack Potency: At least Wall level physically (Should be comparable to Lala who smashed through a wall; can make use of Sukiyapodes' Hammer; Smashed her own door down), likely far higher (Comparable to characters who can harm her). At least Moon level, possibly Dwarf Star level with magic (Went toe-to-toe against Carbuncle. Blew up a moon with Magic Gun) | At least Moon level, possibly Dwarf Star level (Noticeably stronger than her base form) | Low Multiverse level (Fought against and defeated the Creator, who created dimensions that comprised the Madou world and is known as the Supreme Being. The Creator should be superior to even Ecolo, whose power would've affected the space of the three Puyo Puyo universes)

Speed: Athletic Human (Outran Honey Bee while she got chased by her. Can keep up with Schezo Wegey), likely far higher (Ran around the Earth in a few seconds, although this comes from an end-credits sequence) with Relativistic+ to FTL attack/magic speed (Able to compete in Puyo matches against Carbuncle) | Unknown but higher than her base form; Relativistic+ to FTL attack/magic speed | Unknown (The battle between Arle and the Creator spanned across dimensions)

Lifting Strength: Class 5 (Can push boulders around) | At least Class 5 (Stronger than base Arle; can easily wield the Divine Lance, which is impractical but not impossible for a human without superhuman strength to use) | Unknown

Optional Equipment: Arle can make use of a variety of items including the following:

Other items can be found here: https://sorceressarle.tumblr.com/possessions

Intelligence: Average with expertise in magic | Likely same as before | Unknown

Weaknesses: Her magic can result in self-harm if used too much (her finger bled after overusing Ice Storm in Madou Monogatari 3). Her Light spell will make her more likely to encounter enemies. | Arle is unable to make use of any non-holy spells in this form. The form itself is a stressful form to maintain and isn't as efficient with her mana as her base form. If Arle pushes her body too much in this form, she will experience a very painful reversion and an extreme feeling of weakness that takes time to recover from. | None notable

Key: Base | Valkyrie Arle | As the Cycleless Supreme Existence