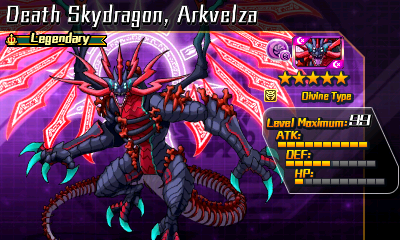 Death Skydragon, Arkvelza is one of the Skydragons in Puzzle and Dragons. The second Skydragon to be created by the Prime Dragon, Eidos, Arkvelza and his counterpart, Zerclea, act as the balances between life and death.

Despite his monstrous appearance and association with death, Arkvelza is actually benevolent in nature, and does his job with Zerclea out of the good for the world, doing his best to keep balance and allow the world to flourish naturally.

During the events of Puzzle and Dragons Z he was captured by the group known as Paradox, who used his powers to tear the surface of the planet into pieces, kickstarting the main plot.

Attack Potency: Planet level (Superior to the elemental Skydragons, who are in turn superior to Vritra)

Speed: Massively Hypersonic+ (Should be comparable, if not superior, to Verche)

Intelligence: High (Has existed for several hundreds of millions of years, has helped to keep the balance of life and death in that time and takes his role very seriously)

Retrieved from "https://vsbattles.fandom.com/wiki/Arkvelza?oldid=5932247"
Community content is available under CC-BY-SA unless otherwise noted.