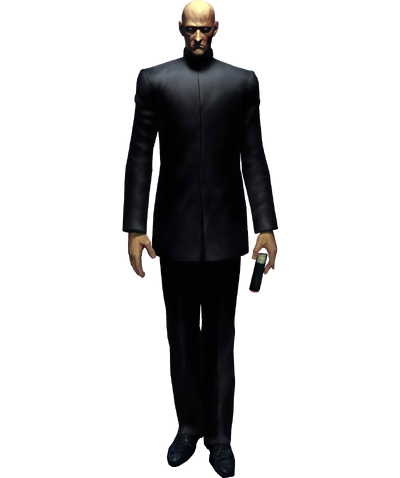 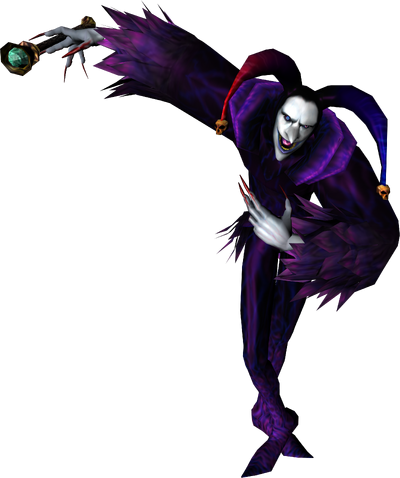 Arkham is a character from the Devil May Cry 3 and is one of the primary antagonists, along with Vergil. A mysterious and shady individual, marked with burns on his face (that seem to pulsate at some points, possibly because of his demonic essence) and is also heterochromatic (one eye is blue, the other is brown). Arkham is human, though he is driven to become a demon, sacrificing his own wife to do so. The ritual in which he sacrificed his wife was a failure, which is where he got the scars on his face, but despite the fact that it was a failure he was able to receive powers, one of which was to transform into Jester. A psychotically enthusiastic man, he wants to possess the power of The Legendary Dark Knight Sparda, and in order to do so, he has to unseal the tunnel between worlds, a tower known as Temen-ni-gru. Statements from Lady and Arkham suggest that Arkham may have never had these cruel intentions until he tapped into demonic powers. Arkham and Vergil meet each other in a library, that can only be assumed as Arkham's.

Resistant to the Following: Reality Warping, Transmutation, Size Manipulation, Petrification (Demons are stated to be resistant to the Beastheads assimilation process, which includes those abilities), Soul Manipulation (Scales from other demons, who can handle going through the crust of the demon world, which is stated to turn souls into monsters), Corruption (Type 3. Can breathe on demonic air, which turns normal people into monsters), Madness Manipulation (Type 3, endured being in the Demon World, which causes despair and insanity), Disease Manipulation (Approaching the Demon World, being inside or near a Demon World nexus causes "unearthly illness" which makes it difficult to concentrate and causes intense nausea and dizziness) and Fear Manipulation (Can casually fight against demons and be around them, and their presence can cause fear)

Attack Potency: At least City Block level (Fought three times with DMC3 Dante as Jester and later damaged a weakened Dante and Vergil as Arkham) | Small City level+ (Obtained the Force Edge, which was keeping the Temen-ni-gru in a dormant state, when Arkham released the seal, its powers covered the sky in a storm. Was only defeated by the combined efforts of Dante and Vergil)

Speed: Massively Hypersonic+ (Casual bullet timer, faster than an injured Dante and Vergil, dodged Dante's non-serious attacks) | Massively Hypersonic+ with Relativistic+, likely FTL Combat and Reaction speed (Fast enough to keep up with both Vergil and Dante, who could block and dodge the Damned Rook Laser)

Intelligence: Gifted, manipulated everyone around him, including his daughter, planned his rise to power from the very start, manipulated even the smart Vergil, which he convinced to be merely a scholar who worshipped evil and had no ulterior motives.

Weaknesses: Not as powerful as most demons, though stronger than he ever let Vergil see, believes he can lie his way through anything | Large and clumsy, believes he wields the devil's power and can rule everything even though he has nowhere near the true power of Sparda under his control.