VS Battles Wiki
Register
Don't have an account?
Sign In
Advertisement
in: Characters, Abstract Entities, Acausal Characters,
and 43 more

Arkay is the Aedric God of Life & Death, and a part of the Pantheon of the Eight Divines. Strangely, unlike the other deities of Mundus, Arkay is seemingly not one of the Et'Ada birthed through the interplay of Anu and Padomay at the dawn of existence, but rather a being who ascended to godhood after the Mortal Plane's creation.

According to a popular, though unlikely legend, Arkay was once an ordinary shopkeeper who collected books to satisfy his passion for knowledge. Upon finding an ancient tome containing mysteries of life and death, he studied it to the point of obsession, becoming consumed by the secrets of its pages and ignoring everything else in his life, which made him fall mortally ill. As he laid in his deathbed, Arkay saw a vision of the goddess Mara and begged her to allow him to continue his studies beyond death so that he could teach them to mortals. In reply, Mara transformed Arkay into the God of Life & Death. Other, more believable myths simply hold that Arkay was a lesser spirit who obtained power and purpose as consequence of Mundus' creation. As the very concepts of Life & Death were meaningless and indistinct from one another before the invention of the Mortal Plane, this idea certainly holds merit.

Whatever the truth, Arkay is a popular deity in Tamriel, particularly in societies where Akatosh, his father, is seem as too distant and incomprehensible by the layman, allowing him to act as the intermediary between mortals and the King of the Gods. Arkay is often associated with the harvest and agriculture, as the cycle of the seasons is akin to the cycle of life & death, and his cults are usually responsible for handling funeral and burial rites. Perhaps the most unusual interpretation of Arkay is found in Skyrim, where he is known as Orkey. He is viewed as a treacherous deity, and an enemy of Shor and the Nords, who steals the lives of mortals and condemns them to unworthy deaths of illness and old age, as opposed to glorious death in violent combat.

Name: Arkay (Also called Ark'ay, RKHET, Orkey, To-Arcka, Tu'whacca). Known by many titles, such as The God of Birth and Death, The Lord of the Wheel of Life, The Tricky God, The God of Nobody Really Cares, The Snake, The Old Knocker, etc.

Gender: Inapplicable. Depicted and referred to as male.

Attack Potency: High Hyperverse level (Arkay is one of the Eight Aedric Divines who sustain and stabilize the whole multiverse of Mundus, keeping it from being consumed by the void of Oblivion. Holds and embodies his own plane of existence, which is infinite in size and higher-dimensional, and controls every aspect of it. Created and embodies the dual concepts of Life & Death, and administers the continuation of their cycle across the Mundus. Should be at least comparable to the Daedric Princes of Oblivion, if not outright superior to them)

Weaknesses: Bound to the Mundus 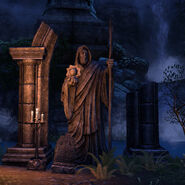 Statue of Arkay in Sancre Tor

Statue of Arkay in Cheydinhal 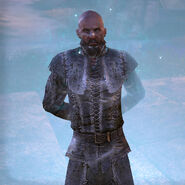 The Keeper Of The Hall, an Avatar of Tu'whacca