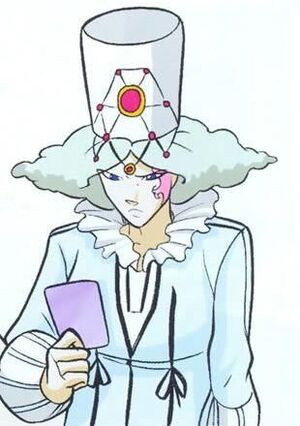 Arkaam, more commonly known as the White Queen, is one of the main antagonists of the W.I.T.C.H. comic series Part VIII; Teach 2b W.I.T.C.H.. She is cold and ruthless ruler, wanting to control everything.

Tier: Unknown, At least 8-A with the Sword of Exile

Powers and Abilities: Fast World Physiology, Magic, Summoning (Can summon various magical tools in her hands[1]), Light Manipulation and Paralysis Inducement (Can summon a magical tool that releases a dark light, that paralyzed the Guardians[1]), BFR (The Sword of Exile casts anyone struck by it into oblivion, where nothing can return, including memories[1]), Absorption (Can summon a magical tool that absorbed Taranee and Hay Lin's combined attack[1]), Energy Manipulation (The Sword of Exile can project a harmful ray of energy[1]), Clairvoyance (Could see where the Guardians hid everyone in the neighborhood by focusing[2]), Electricity Manipulation (Can project lighting from her hands[2]), Resistance to Cold Temperatures (Survived being frozen over by Irma's ice, and broke out seconds later[1])

Speed: At least Hypersonic (The Fast World and it's residents naturally move and vibrate at a faster frequency than the normal world[3]. The Fast World and it's residents move so fast that the act of accelerating to their normal speed generates heat, and sets them on fire[3]. Myrms, creatures of the fast world are stated to be able to move so fast they set the air itself on fire[4])

Stamina: Unknown (Hasn't shown any problems with using her powers repeatedly but the extent is unknown)

Standard Equipment: Sword of Exile, and other magical tools.

Intelligence: Above Average (Managed to trick W.I.T.C.H. into joining her side in the war against the Shadow Queen. Rules over an entire kingdom)

Magic: The White Queen's magic allows her to summon various magical tools to her hands, as well as project lighting.