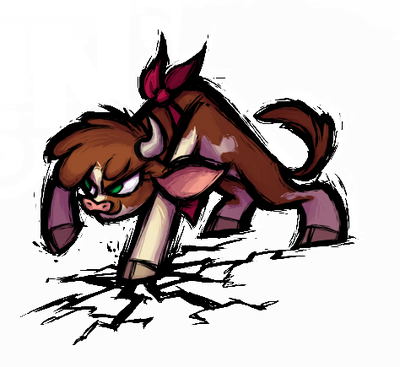 Arizona is a young and surprisingly brave for a 1 year old heifer. Born and raised in The Prairie by her father, Texas, Arizona extremely righteous and always wanted to do what was best. She was chosen to be the Champion and Key Keeper of The Prairie and was selected by lottery to fight for her fellow Key Keepers for the Prophet's Key. An item that would close the portals to the Predator's realm.

Attack Potency: Small Building level+, higher with Magic (Can create large craters in the ground with her stomp. Comparable to other Key Keepers such as Velvet)

Lifting Strength: Superhuman (Can easily throw and bounce her competitors off with her back)

Intelligence: Very young and inexperienced. Skilled in combat and fighting

Weaknesses: Prefers to fight close ranged than from afar. Inexperienced. Has limited magic but can regain some