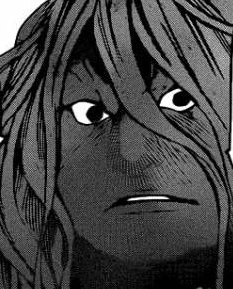 Arimaru is a member of the Muhou School and one of the members of the leader's Personal Corps. She is also known as the ant.

Arimaru's Spike: Arimaru is first seen using cone-shaped spikes with a spiral motif to impale her victim's feet from underground.

Arimaru's Sword: A gauntlet-sword resembling an Indian Pata worn on her right hand.

Arimaru's Shield: When forced to come out, she picks up a huge metal shield, big enough to cover her whole body, with a small slit in it where she can put her sword in.

Thanks to her body, Arimaru is gifted with herculean strength, allowing her to move her giant shield with ease and even run with it. She fights at her best inside her special sand-filled arena, attacking from an underground tunnel. Thanks to her keen perception she can pinpoint with great accuracy the position of her enemies as they move on the sand. She can also move very well on the sandy ground, a fact that she takes advantage of when fighting outside of her tunnel. She's also proficient with many weapons.

Sunakari no Jin (Sandy Hunter's Formation): Arimaru puts the sword through the shield then rushes forward. If the opponent is not impaled then they are sent flying after being hit.

Retrieved from "https://vsbattles.fandom.com/wiki/Arimaru?oldid=4106902"
Community content is available under CC-BY-SA unless otherwise noted.