VS Battles Wiki
Register
Don't have an account?
Sign In
Advertisement
in: Characters, Saint Seiya, Anime Characters,
and 19 more 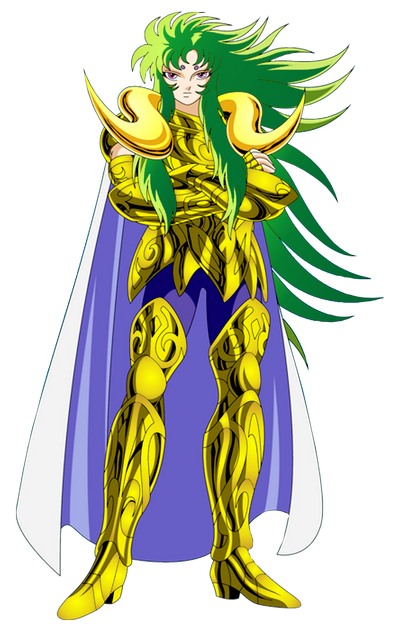 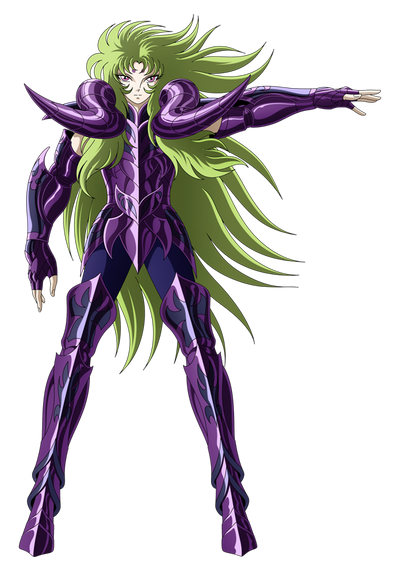 Aries Shion is the original Grand Pope of the Sanctuary and one of the remaining survivors of the Holy War from the 1700s. He also served as the master of Aries Mu. The latter would eventually become the successor to the Gold Cloth of Aries slightly prior to his death. Later Shion is one of the resurrected Saints in the Hades Chapter.

Credit goes to Azraeuz for the render

Superhuman Physical Characteristics, Matter Manipulation, Soul Manipulation, and Temperature Manipulation (7th sense users can cause destroy matter down the level below Quarks. Causing damage to a Gold Cloth requires a power that can break apart matter that exist below Quarks. Gold Saints have fought each other, and those equal or above them causing damage to their Gold Cloths or the Gold Cloth Armor equivalent. Gold Saints can generate a shield made from pure Cosmo around them using their 7th sense at the start of battle, and their Gold Cloths are also infused with the power of Cosmo. Gold Saints such as Capricorn Shura cut twenty billion souls at once and Cancer Deathmask (Saint Seiya) can destroy twenty billion souls all at once. The power of Ohm could also affect twenty billion souls. Gold Saints can reach temperatures of over a million degrees when focusing their attacks, Energy Manipulation, Aura, and Heat Manipulation (Upon powering up their Cosmo they cause the area around them to burn up with intense heat, and their attacks are also imbued with heat), Extrasensory Perception (By the 6th, and 7th sense), Enhanced Senses (They are capable of tracking events taking place over a large distance including other realms. Can also hear bones breaking from a distance away. In addition, he also has two additional senses that are known as the 6th and 7th sense), Reactive Power Level (The skills of the Saints continues to improve throughout their fights, and they continue to get stronger every time they get knocked down), Reactive Evolution (Can analyze and comprehend the components of an enemy's attack after seeing it once, and adapt to it), Telepathy, Pressure Points (The Star Life Points are pressure points on the body), Probability Manipulation, and Statistics Amplification (Through the Power of Miracles impossibilities can be turned into certain possibilities, as well as increase their stats such as speed, and power), Summoning (Saints can summon their cloths), Martial Arts, Longevity, Regeneration (High), Intangibility, Spatial Manipulation, Time Manipulation, Mind Manipulation, Flight, Forcefields/Barrier, Telekinesis, Teleportation, Acausality

All previous abilities, Resurrection, and Immortality (Type 4 - After obtaining the 8th sense, he gained absolute control of his own soul and can resurrect himself), Incorporeality (exist without a body, as a soul), Regeneration (Low Godly Regeneration - Users of the 8th Sense and create a new body for themselves after it has been destroyed), Extrasensory Perception (With the "8th Sense" which exist beyond the five basic senses, the sixth, and the seventh)

All previous resistances, and Resistance too Death Manipulation and Law Manipulation (The Underworld kills anyone that is "Alive" when entering into it, but 8th sense users can enter it alive. The 8th sense allows the user to overcome the laws that Hades had created), Sense Manipulation (Has the 7th, and 8th Sense)

Attack Potency: At least Galaxy level, Universe level+ when using his full power (The most powerful of the Gold Saints, stalemated Libra Dohko, superior to Gemini Saga. He could tear down Aries Mu's Crystal Wall with a telekinetic thought. His power could destroy, and reshape the Universe.)

Durability: At least Galaxy level, Universe level+ when burning his Cosmo to the maximum, Higher through Crystal Wall

Stamina: Nearly limitless (Gold Saints can fight for a thousand days); The Saints can keep fighting despite suffering through severe damage, and even critical damage that would otherwise kill a person. They can survive under the sea in near-freezing point temperatures for close to 2 hours. Survive in Oxygen thin air while being near death by losing more than half their blood at the same time, and fight through critical damage to the heart.

Intelligence: Shion is a master warrior (According to the Taizen Encyclopedia, he's a better fighter than Thanatos and Hypnos, who have thousands of years of experience). In addition, he's a skilled alchemist/blacksmith, has excellent knowledge of myths, astrology, and history, lived for over two centuries. He also trained Aries Mu. 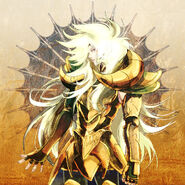