VS Battles Wiki
Register
Don't have an account?
Sign In
Advertisement
in: Tier 7, Tier 7-A, Characters,
and 33 more 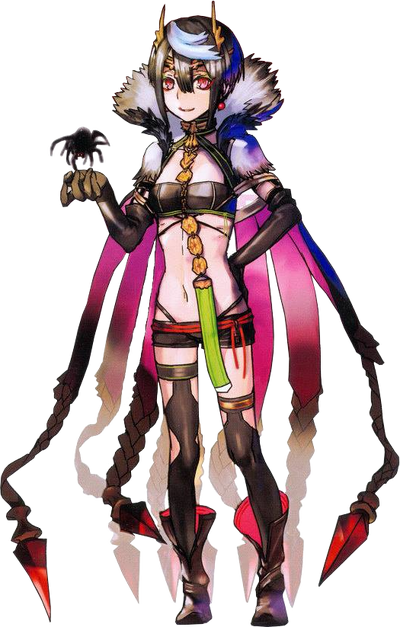 Ariel is the current Demon King and the ancestor of the Taratekt species. Ariel has been alive before the creation of the System and was born as a Human-Spider-Chimera from an experiment of Potimas Hyphenath, in which he combined his own DNA with that of a spider making him her genetical father. Before the creation of the System she had a body that barely allowed her to move and left her unable to walk, due to having altered internal organs which amongst others resulted in poison she produced being released into her own blood. After Potimas abandoned her she was raised by the stray Angel Sariel.

Durability: At least Mountain level (Superior to Arachne Kumoko and her defensive stats are nearly equal to her offensive ones)

Stamina: High (Has sleep nullity and can regain energy through the gluttony skill at any time, has High-speed SP Recovery and Great SP Consumption Down)

Range: Likely hundreds of kilometers (Superior to Arachne Kumoko and the Queen Taratekt)

Intelligence: Above Average (has thousands of years of experience, Thought Acceleration, Parallel Will and High-Speed Calculation enables her to perform well reasoned decisions in short time, able to do the politics necessary for treaties between the church and demons, possesses strategist and cooperation skill)

Weaknesses: The Demon King Title makes it so that she can be killed by someone with the Hero Title regardless of power difference and her soul is close to collapsing form old age

Note: See here for a complete list of her skills, except Humility and Telepathy. Note that some skills are named differently, because of differences in translations.