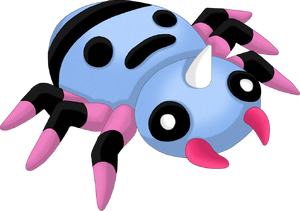 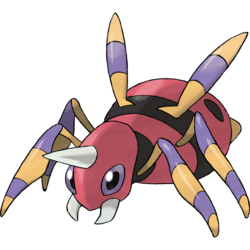 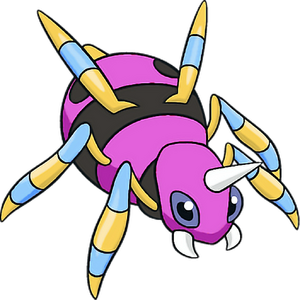 Ariados is a Pokémon that resembles a spider. It has a red body with black stripes and markings on its rear that form a face. In the center of its head is a small, white horn. Additionally, it also has small purple eyes and a pair of white mandibles. Ariados has four yellow legs with purple stripes; long, pointed growths on its back appear to be remnants of its fifth and sixth legs. Ariados's feet are tipped with tiny hooked claws that enable it to scuttle on ceilings and vertical walls. It spins a single strand of a special string endlessly out of its rear. The string can also be spun from its mouth; however, it is hard to tell which end is which.

Rather than making a nest in one specific spot, it wanders to hunt aggressively after darkness falls. It will attach silk to its prey and set it free. Later, it tracks the silk to the prey and its friends. It spews thread on prey before biting into them with its fangs. Ariados makes its nest in the depths of the forest. Ariados and its pre-evolution Spinarak are the only known Pokémon that can learn Toxic Thread.

Attack Potency: Multi-City Block level+ (Capable of battling Pokémon that can harm him. Comparable to Diglett and Horsea) | Large Town level (Via scaling to Dawn's Piplup, who is comparable to second-stage Pokémon)

Speed: Massively Hypersonic+ (Can dodge attacks from Magnemite and other Electric Pokémon) | Sub-Relativistic (Comparable to other Pokemon at this level, such as Charmeleon)

Range: Standard melee range, hundreds of meters with most attacks

All of the previous moves

Egg Moves (Can be learned by both)