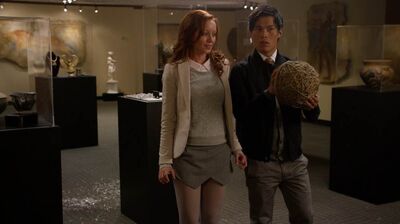 The Ariadne's Thread is a magical ball of thread that Ariadne gave to Theseus. Originally used by Theseus to navigate himself through the Labyrinth, it was later taken by Golden Axe Food Company to re-create the same Labyrinth. It was later used by Ezekiel Jones and Cassandra Cillian to escape the Labyrinth as well. It can also be used to re-create the powerful Labyrinth, in order to give the thread's user a personal realm. It will also give to the user unbeliavable luck and prosperity.

The said Labyrinth is a magical structure created to hold the Minotaur and to grant prosperity to its users. Unlike a common Labyrinth, it exists in seven spatial dimensions, and is affected with a spell that will confuse and try to trap anyone in it. In modern day the Labyrinth was kept by the Golden Axe Food Company as a way of controlling their business empire, as the Minotaur that still roams the Labyrinth demands yearly human sacrifices to him in exchange for the company's prosperity

Age: Thousands of years since its creation

Attack Potency: Likely Complex Multiverse level (The Thread can create a powerful and inescapable labyrinth, which is a 7-Dimensional space and gives to the owner the ability to control it)

Needed Prerequisite for Use: The user must have some rare artifacts to focus the power of the Thread, otherwise it won't create the Labyrinth.

Retrieved from "https://vsbattles.fandom.com/wiki/Ariadne%27s_Thread?oldid=3388167"
Community content is available under CC-BY-SA unless otherwise noted.