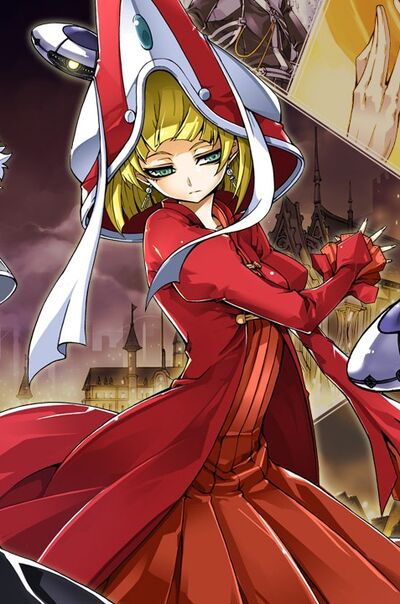 Aria Godspell (아리아 가스펠, Alia Gaseupel) is a Witch and is Tasha Godspell's adoptive little sister. Often called the "Red Witch" due to her red hat and dress. Before she became a witch, she was once a very bright and kind girl who loved her brother dearly. She likes collecting pretty things, especially receiving gifts from her brother. While her personality has become dark and sinister since becoming a witch, her love for Tasha has not diminished but intensified. When Halloween was bragging to Aria about her situation with Tasha, Aria became furious. So strong is Aria's desire to be with her brother that she massacred an entire town just to lure him there. Despite Tasha's pleas for her to stop being a witch, Aria continues as a witch, knowing she can never be normal again as she killed their father and countless innocent people since the change. Unable to live a normal life with Tasha, Aria instead resolves to turn Tasha into her Supporter, so that he will belong to her forever. All of Aria's actions and motives are directed towards this goal.

Her current Supporter, Aegis, takes the form of numerous flying disks that could freely and independently attack and defend. Each disk's power is equal to an A-class WH. When Aria learned of Tasha's tutelage under the White Witch Edea Florence, and seeing how much Edea cared for Tasha, Aria fought and killed Edea out of jealousy. Though victorious, Aria lost most of her Aegis disks in the battle. Even with her Supporter now only having two disks, Aria is still extremely powerful, and remains one of the most feared Witches. She now follows Varete who works under North.

Shortly after becoming a Witch, Aria placed a magical curse on Tasha that is slowly 'killing' him. When the curse is complete, Tasha's life as a human and WH will end, and he will be transformed into Aria's new Supporter, bound to her forever. She has expressed remorse for using the curse, but since Tasha refuses to come to her willingly, she will use whatever method necessary to have him for herself. Before she was killed by Aria, Edea had placed a seal on the curse, slowing it down greatly and giving Tasha time to try to undo it. The only way currently know to remove the curse is for Aria to either willingly cancel it, or for Aria to die. However, when Tasha used "The Song of Moirae", the seal placed by Edea was broken and accelerated the curse into its final stage.

Powers and Abilities: Superhuman Physical Characteristics, Magic, has robotic sensors that follow her and can fire energy blasts and turn into shields, can use mana for offensive and defensive capabilities, can stand on her sensor's shields which gives her flight

Speed: Likely at least Supersonic+ (Can react to attacks from Tarras and Yue)

Retrieved from "https://vsbattles.fandom.com/wiki/Aria_Godspell?oldid=4610246"
Community content is available under CC-BY-SA unless otherwise noted.