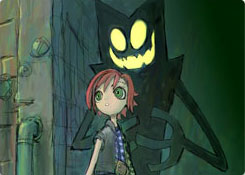 Ari is the main protagonist of Okage: Shadow King. He's describe as an ordinary boy with not much emotion who just blends into his shadow. During the beginning of the game, Ari's Sister Annie is attacked by a ghost and cursed. In order for him to save his sister, Ari becomes the host of Evil King Stan who is the reincarnation of The Great Evil King Gohma. Ari then becomes Stan's slave and is forced to go on quest to help Stan regain his full power and take over the world by defeating the false Evil Kings who have stolen his power.

Superhuman Physical Characteristics Enhanced Senses (Ari can see invisible beings who are no longer apart if reality), Magic, Fire Manipulation, Ice Manipulation, Electricity Manipulation, Statistics Amplification, Mind Manipulation, Healing, Sleep Manipulation, Resurrection, Supernatural Luck (His Luck raised his chance to physically hit Epros with physical attacks), Non-Physical Interaction (Can harm illusions and other "Overshadowed" beings) Invisibility, Intangibility, and Non-Corporeal (Those who are "Overshadowed" have lost their place in reality and are no longer apart of history, existing existing outside of space and time, and cannot be seen, heared, or interacted with, their very actions to the world go completely unoticed, even those who can effect the mind and soul are unable to effect them)

Superhuman Physical Characteristics, Magic, Fire Manipulation, Ice Manipulation, Electricity Manipulation, Enhanced Senses (Ari can see invisible beings who are no longer apart of reality), Extrasensory Perception (Stan can sense other evil beings), Animated Shadow (His shadow is possessed by Stan, who can freely move on his own), Non-Physical Interaction (Ari and Stan can both effect Non-Corporeal beings), Intangibility, Non-Corporeal (As Ari's shadow, Stan dosn't have physical form), Soul Manipulation (While Ari is looking into someone's eye's while directly in front of them, Stan can take control and manipulate their soul), Statistics Amplification, Supernatural Luck (His Luck raised his chance to hit Epros with physical attacks), Healing, Elasticity (Due to his physiology, Stan is capable of stretching himself), Energy Projection, Resurrection, Explosion Manipulation

Attack Potency: At least Multi-City Block level (Defeated and later becomes much stronger than Evil King Chairman who was stated to have the power to incinerate an entire building which would require this much power) | Large Star level (Fought and defeated Beiloune after he classified himself with the full power of "Classification")

Weaknesses: If Ari is in complete darkness, Stan cannot appear due to Ari not having a shadow. If Ari is killed, Stan will be sealed back inside his bottle.