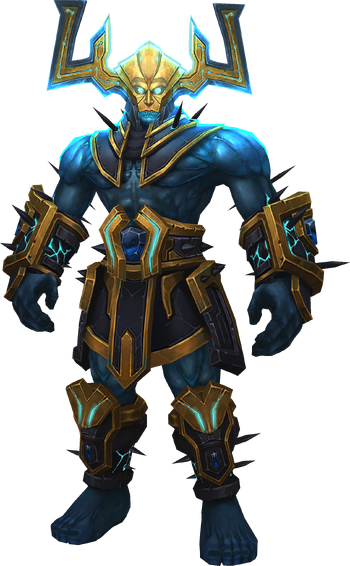 Argus the Unmaker was a titan world-soul that resided within the planet of the same name. He was a servant of the Burning Legion's master, the fallen titan, Sargeras. Argus had slept undisturbed for countless millennia until Sargeras emerged from the depths of the cosmos, seeking civilizations that he could corrupt into new agents of his Legion. Sargeras sought cunning and tactically minded commanders who could lead his disorganized demonic hosts, and the titan saw just that in the Eredar that dwelt on Argus. After accepting the fallen titan's false offerings of knowledge and power most of the Eredar were transformed into monstrous demons. Their planet, ravaged by fel energies, became the very homeworld of the Legion. Argus was forced to act as a catalyst for the Legion's resurrections, allowing the Legion's demonic servants to endlessly resurrect within the astral dimension of the Twisting Nether.

After millennia of unending torment Argus was finally put out of his misery by the heroes of Azeroth who had invaded the Legion's homeworld in order to end Sargeras' Burning Crusade. Freed by Azeroth's champions, the titans of the Pantheon and the heroes confronted Argus in a final battle that ended the Unmaker's life. The last vestiges of his power were used to imprison Sargeras at the Pantheon's seat of power.

Powers and Abilities: Superhuman Physical Characteristics, Large Size (Type 1), True Flight, Scythe Expertise, Creation (Can create weapons seemingly out of nowhere, comparable to the other titans who could create entire planetary systems), Magic, Immortality (Types 1 and 3), Regeneration (Low-Godly. Quickly regenerated his corporeal form after Aman'thul had caused it to "dissipate." Should be comparable to the members of the Pantheon who recreated their bodies from nothing but their souls), Energy Projection, Darkness Manipulation, Soul Manipulation, Damage Boost, Summoning (Displayed the ability to summon multiple constellar to fight for him after Aman'thul had destroyed his body), Spatial Manipulation, Telepathy, Teleportation (Demostrated the ability to teleport several times during his fight against the heroes of Azeroth), Portal Creation (Opened numerous portals during the fight against Azeroth's champions)

Attack Potency: Likely Solar System level (Should be comparable to the rest of the titans who can fight Sargeras), High Universe level with the End of All Things (stated to have the potential to unmake the universe which is infinite in size)

Stamina: Godlike (Endlessly powered the resurrections of all demons without respite for tens of thousands of years)

Range: Likely Interplanetary, Universal with the End of All Things

Standard Equipment: Scythe of the Unmaker

Note: There seems to be an inconsistency between the powers of Argus and the rest of the Titans. This is likely due to conflicting writing between different writers. It could, however, potentially be explained by Argus' own natural affinity towards manipulating space.

Start a Discussion Discussions about Argus the Unmaker