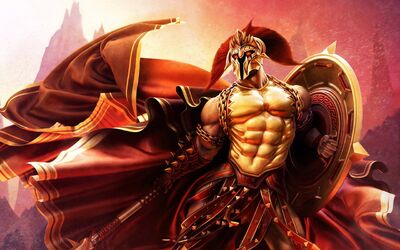 Ares is the Greek God of War, Battlelust, and Masculinity. He is the Son of Hera and Zeus and is one of the 12 Olympians.

Powers and Abilities: Superhuman Physical Characteristics, Immortality (Type 1 and 5), Shapeshifting, Empathic Manipulation (Made Diomedes fearful from just his presence, can inspire men in the heat of battle), Fire Manipulation, Sound Manipulation (In the Illiad, roared as loud as 9,000-10,000 men after being stabbed by Diomedes), Transmutation (Transformed his daughter Harmonia and her husband Kadmos into serpents), Flight (In the Illiad, flew back to Olympus after being stabbed by Diomedes), Summoning, Size Manipulation, Weapon Mastery, Power Bestowal (Can grant mortals "dauntless youth"), Gravity Manipulation (Controls the orbit of Mars), Invisibility (Ares shouted for the Trojans, but the Trojans could not see him), It is implied that those he saved can transcend fate, Clairvoyance (Heard the prayers of a female servant), Darkness Manipulation (In the Illiad, he covered the Trojans in a veil of darkness)

Attack Potency: High Universe level (He should be comparable to the other Greek gods, and was able to whirl the planet, or star as it was considered in Greek times, Mars. Stated to have destroyed Titans. Was defeated by Athena)

Speed:  Relativistic (Scaling from the other Greek gods)

Durability: High Universe level (Fought the Giants who attacked Olympus, and scaling from the other Greek gods)

Intelligence: He has thousands of years of combat experience and is the god of war. Though he has been described as the unrestrained and violent aspect of war in contrast to his sister, Athena, and has created all weapons and tactics known to man. He has been fooled before, specifically by Hephaistos.

Weaknesses: Very quick to anger and jealousy, and has an obsession for war. This has led to him being revulsed by most of the Olympians and gods.