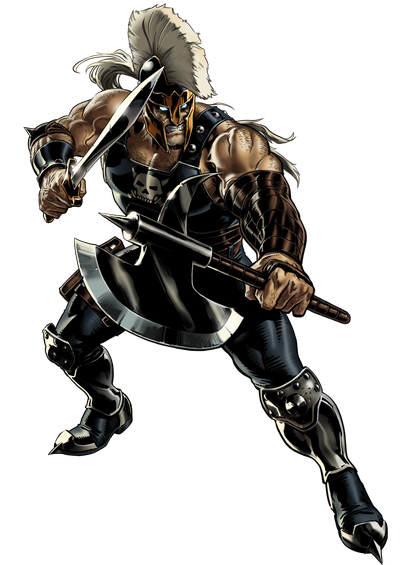 Ares is a fictional character, a deity in the Marvel Comics Universe based on the Greek god of the same name. He first appears in Thor (vol. 1) #129 (June 1966) and was created by Stan Lee and Jack Kirby.

Ares has commonly appeared as an enemy of Thor and Hercules and starred in his own self-titled series in 2006.

Classification: Olympian God of Savage Warfare, Personification of war on every plane and future

Range: Extended melee range with his bladed weapons, longer with firearms and explosives

Standard Equipment: Maintains a vast array of weapons, both ancient and modern. At one time possessed gauntlets that allowed him to match Hercules in physical strength, but he no longer has them.

Intelligence: Gifted. A master of all forms of hand to hand and armed combat. Expert with numerous weapons, including ancient weapons and conventional, modern-day firearms. He is an aficionado, expert, and collector of the most unusual instruments and methods of death-dealing. He is also well versed in torture, interrogation and combat tactics.