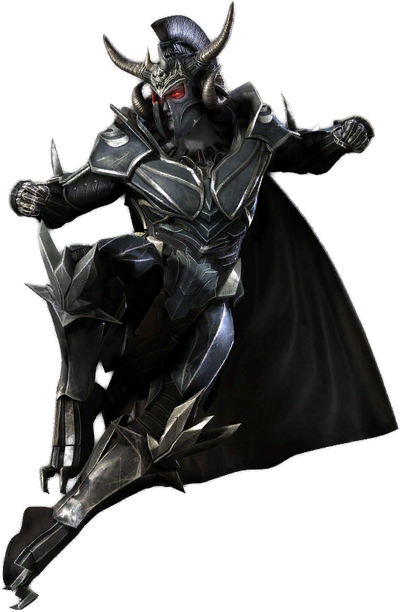 Known as Mars in Roman mythology (and early iterations of Wonder Woman), Ares is one of twelve born to Zeus and Hera. He became the God of War in the Greek pantheon and would be the pure inspiration for the soldiers in Greece. However, he never fit in well with the other Gods, even managing to overthrow Hades as the ruler of Tartarus. He also attacked the Amazons by sending in Hercules. Ares would then raid Thermyscira himself but is stopped by a newly christened Wonder Woman. Within that same timeframe, he would attempt to trigger World War III by manipulating US and Soviet executives to launch their missiles at each other, which was stopped again by Wonder Woman. This would end up prompting Ares to gain an insatiable desire to stop her at any costs. Superman's regime has been effective in suppressing violence. When the weakened god discovers the heroes from a parallel world are fighting One Earth Forces, he helps fuel the conflict.

Tier: Low 6-B, higher via Empowerment

Powers and Abilities: Superhuman Physical Characteristics, Immortality (Type 1, 3 and 5), Regeneration (At least Low-Mid as he regrew the hand Wonder Woman severed, likely Low-Godly, Ares is immortal due to his status as a god, and as such cannot die, only 'fade' as Wonder Woman describes, and can regenerate himself by feeding on conflicts), Nigh-Invulnerability (As a god, Ares can only be harmed by divine-like beings or artifacts when he's not weakened), Telekinesis, Energy Manipulation and Projection, Reality Warping, Time Manipulation (Has the ability to halt time around others in a limited capacity), Empowerment (Naturally feeds on all conflict on the earthly plane, which empowers him), Summoning (Can summon various weapons), Magic, Necromancy, Fire Manipulation, Pocket Reality Creation, Invisibility, Shapeshifting, Size Alteration, Flight, Teleportation, Dimensional Travel, Master Hand-To-Hand Combatant, Weapon Mastery

Attack Potency: Small Country level, possibly higher via Empowerment (Fought Wonder Woman while he was weakened by the peace imposed by the Regime, defeated Aquaman. As a god, Ares is well above the average superhuman within the Injustice series and his godly origin as a son of the thunder god, Zeus, puts him in a higher class than most of his pantheon.)

Durability: Small Country level (Able to withstand the attacks of Aquaman and Wonder Woman even while being severely weakened by lack of conflict. Can endure Superman's attacks)

Stamina: Likely infinite (due to his status as a god)

Standard Equipment: Various weapons of war like his sword or a double-edged battle axe, his armor.

Intelligence: Incredibly Intelligent. Ares is a master manipulator and strategist and a master of virtually all forms of combat and weapons. Masters of various forms of magic as he was able to undo a sleeping spell so powerful on Wonder Woman and Superman, even the Spectre could not wake them.

Weaknesses: When there is no conflict, Ares is starved and greatly weakened to the point where beings far below him can defeat him in a single battle.

Retrieved from "https://vsbattles.fandom.com/wiki/Ares_(Injustice_Composite)?oldid=5998343"
Community content is available under CC-BY-SA unless otherwise noted.