VS Battles Wiki
Register
Don't have an account?
Sign In
Advertisement
in: Characters, Game Characters, Gods,
and 20 more 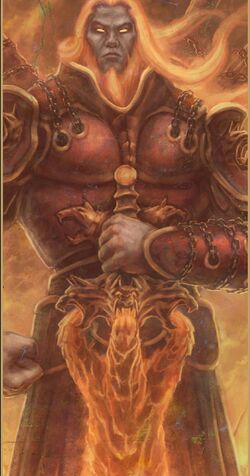 Ares was the original god of war and the main antagonist of the God of War game. He is the son of Zeus and Hera. Ares was the oldest child of Zeus and commonly referred to as the most hated God on Olympus even before Kratos killed him.

Powers and Abilities: Superhuman Physical Characteristics, Magic, Highly skilled warrior, Accelerated Development (Scales from Kratos, who can become stronger and faster overtime as the God of War), Telekinesis (Can wipe out entire armies), Telepathy, Pocket Reality Manipulation (Is capable of reality warping inside), BFR and Power Mimicry (Can send Kratos into a pocket dimension where he fights a bunch of clones of himself that can replicate his powers, like Zeus' Fury), Can materialize various weapons out of thin air, Can sense beings thousands of miles away, Size Manipulation, Shapeshifting, Immortality (Types 1 and 2), Animal Control (commanded several mythical beasts such as harpies), Fire Manipulation, Disease Manipulation (Caused Calliope to be deformed due to a plague), Regeneration (Mid-Low), Astral Projection (communicated with Kratos through fire), Earth Manipulation (Summoned volcanic rock structures in his battle with Kratos), Flight, Teleportation, Soul Summoning and Power Nullification (Can nullify and strip others off of their own powers inside his own pocket dimension. Also stole Kratos' Soul Summon and can use it himself, and it can nullify magical powers), Resistance to Life Manipulation and Fire Manipulation (scales from his champions, who are resistant to these abilities with his armor) Petrification, Transmutation, and Soul Manipulation (Resists Kratos' abilities)

Attack Potency: At least High Universe level, likely Universe level+ to Low Multiverse level (Is the mightiest Olympian after Zeus, Poseidon and Hades, and should be thus stronger than the likes of Helios)

Speed: Infinite (Superior to Helios and the Primordials in speed. Likely not too far off from God of War 2 Kratos)

Durability: At least High Universe level, likely Universe level+ to Low Multiverse level (Easily withstood being pierced by one of his own spikes, fought Kratos with the power of Pandora's Box, who could trade blows with him, is superior to Helios)

Stamina: Virtually tireless (Fought in a great war for hundreds of years)

Standard Equipment: A sword and five spider-like legs sprouting from his back

Weaknesses: Pandora's Box and the Blade of Olympus

Note: Those who want to know why the God of War gods are rated so high can consult this blog. 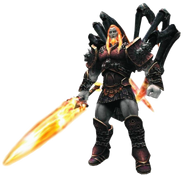