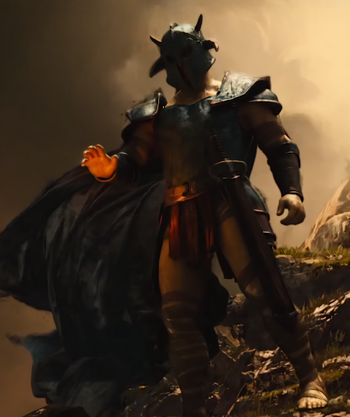 Ares is the fearsome Olympian God of War and one of Zeus' many divine children. According to legend, when Zeus created humanity, Ares was disgusted with his father's creation and sought to reveal their true nature, forever cursing men with wrath, hatred, and bloodlust. As a response, Zeus gave life to the Amazons, to protect men from evil and guide them with love.

As time passed, the animosity between Ares and Zeus only grew, and eventually culminated in the War of the Gods. During it, Ares personally slew the Olympian deities one by one and faced his father in a final battle. Ares was defeated, though Zeus was left mortally wounded. With his dying breath, the King of the Gods created the island of Themyscira, where the Amazons would stay concealed, always preparing for Ares' eventual return.

Since them, Ares was indirectly behind most major conflicts and wars in human history, influencing the minds and hearts of key figures from the shadows, bestowing them with wrath and ambition, and gifting them with inspiration for strategies and battle plans. He was finally stopped in 1918 by Wonder Woman, Zeus' daughter with the Amazon Queen Hippolyta.

Name: Ares. Has had numerous identities throughout human history such as Sir Patrick Morgan

Classification: Greek God, God of War, "God of Truth" (by himself)

Attack Potency: Large Island level (Mortally wounded Zeus in single combat, who created the island of Themyscira with his dying breath. Comparable to heavy hitters such as Wonder Woman)

Striking Strength: Large Island Class (Traded strikes with Wonder Woman and ultimately managed to get the upper hand before her ascension)

Range: Hundreds of Meters, likely thousands of miles with teleportation

Intelligence: Incredibly Intelligent. As the God of War, Ares is an unparalleled genius in all areas of warfare and has been indirectly behind most major conflicts of human history. A tactical and strategic mastermind, Ares manipulated the minds and influenced the decisions of key people throughout history, making it so that wars would progress as he intended. Ares is also a scientific genius, whispering ideas and inspiration into men's minds which led to the creation of new weaponry such as firearms, military aircraft, and chemical weapons. Ares is also a master combatant holding hundreds of thousands of years of experience.