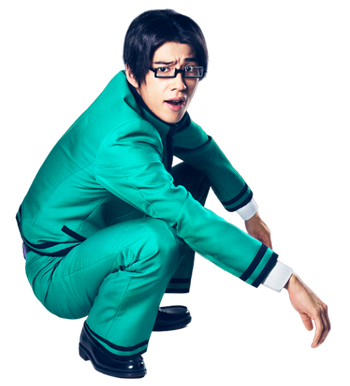 Aren Kuboyasu (窪谷須 亜蓮, くぼやす あれん lit. Kuboyasu Aren) used to be a delinquent in his former school and only Kusuo, Shun and Touma know this. Aren is one of the main characters of the series and was starred by Kaku Kento in the live action of the series

Speed: Unknown, at least Athletic Human to Peak Human (Able to keep up and respond to 4 armed thugs without showing any difficulty. Fast enough to blocked a hitting from a piece of wood)

Lifting Strength: Athletic Human (Could lift a grown man with one hand, with no strain)

Durability: Street level (Can withstand being hit by a piece of wood without any injuries)

Stamina: Likely Quite High (Didn't show any fear to dozens of thugs and brave to fight with them of all)

Retrieved from "https://vsbattles.fandom.com/wiki/Aren_Kuboyasu_(Live_Action)?oldid=5294613"
Community content is available under CC-BY-SA unless otherwise noted.