VS Battles Wiki
Register
Don't have an account?
Sign In
Advertisement
in: Tier 6, Tier 6-B, Tier High 6-A,
and 77 more 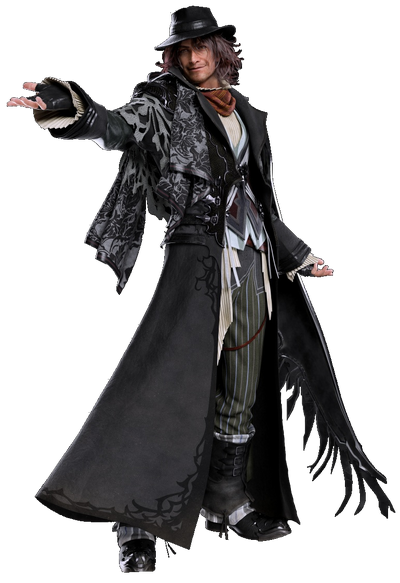 Ardyn Izunia (Formerly known as Ardyn Lucis Caelum) is the main antagonist of Final Fantasy XV. Over two thousand years before the game, Ardyn was set as the King of Lucis destined to purge the world of the monstrous creatures known as daemons. However, he found himself in a trap set up by his brother Somnus who declared himself as king and accused him as a traitor, chaining him in Angelgard where he would remain for two thousand years due to having absorbed a vast quantity of the energy of the Starscourge, giving him immortality. Soon after being freed, he adopted the surname "Izunia" and swore revenge on the brother that betrayed him, awaiting the day on which he would destroy the True King and the Crystal.

At some point in the future, Ardyn became the Chancellor of the Niflheim Empire, but despite his rank, he seemed to hold more authority than Emperor Iedolas Aldercapt himself. When the game begins, Ardyn appears at random points in Noctis' journey to offer the prince and his allies advice and even assistance, to bring Noctis closer to the Crystal and his destiny as the King of Light.

Age: 33 during Episode Ardyn: Prologue. Over 2,000 years old as of Final Fantasy XV

All previous abilities enhanced, Summoning (Can summon various Eidolons from Summonstones and the World of Illusions), Willpower Manipulation (a person's will is power there and enables them to do a multitude of things the stronger their will[1]), Reactive Power Level (the greater someone's will, the greater their power[1]), Law Manipulation (Beings with strong wills can overwrite the laws of the world and bend them to their will[1]), Creation (With a powerful enough will, once can create various things such as phone lines, airships and even entire countries and worlds[1]), Sealing (Can seal off large areas and people with her will, such as Cecil sealing himself in Castle Baron or the cast sealing Kefka inside a Torsion[1]), Dimensional Travel (Characters can open Torsions, rifts in space-time to travel various dimensions[1]), and Immortality (Type 2) (Due to the crystal core of darkness's influence in the hands of Ardyn, warriors will not die no matter how injured they are)

Resistance to Mind Manipulation, Soul Manipulation (Via Zalera, the Death Serpah, who was going to absorb the souls of every living being on the planet), Corruption & Body Puppetry (Due to their light, Warriors of Materia can dispel attempts to control them), Empathic Manipulation, and Madness Manipulation (Type 3; Resistant to the effects of the True Moon, which is capable of affecting the hearts and minds of all living beings on the planet[2]), Gravity Manipulation (Unaffected by the gravitational pull of the True Moon, which even the Lunar Whale couldn't escape from[2]), Spatial Manipulation, Deconstruction, and BFR (Can withstand the attacks of Atomos, who manipulates space[2], crush enemies down to a molecular level[3], and can warp them into another dimension[3]), Extreme Cold and Cosmic Radiations (Can fight and survive on the moon), Absolute Zero (Can survive Shiva's ice attacks[4], including Diamond Dust),

All previous abilities greatly enhanced, the abilities of the crystals (The Crystal Core contains the powers of Neo Exdeath and God of Magic Kefka[1]), Reality Warping (The crystal can rewrite the world[1]) Corruption and Body Puppetry (Ardyn was able to corrupt Caius Ballad and Ultimecia and control their bodies Seymour implies that the wielder of the Crystal could directly control the warriors of spiritus and drive them to rampage.[1]), Law Manipulation (The Crystal Core maintains the laws of the Land of Respite[1]), Sealing and Power Absorption (The Crystal Core was capable of sealing the transformations of the Warriors of Spiritus inside itself and can control them, which includes Hell Emperor, Neo Exdeath, God of Magic Kefka, Safer Sephiroth, Chaos Bahamut, Griever Ultimecia, Sin & Braska's Final Aeon, Seymour Omnis, The Undying, and Incognitus[1]), Clairvoyance (Ardyn was capable of using the crystal core to see what's happening in the other worlds.[1]), Immortality (Types 2 and 8, Ardyn was able to prevent all warriors deaths no matter how injured they were via the crystal[1])

Attack Potency: At least Country level, higher with Arminger Arsenal, possibly Multi-Continent level (Comparable to post-timeskip Noctis, wields the same Armiger Arsenal used by his descendants. Fought and defeated King Regis in his prime) | At least Large Country level, possibly Multi-Continent level (Far stronger than before in Dawn of the Future, had the power of the past Kings and fought Bahamut in the Beyond) | At least Multiverse level+ (Is able to keep up with the other Warriors of Spiritus and draws power from the gods of the cycle. Participated in the defeat of Shinryu.) far higher with the Crystal Core of Darkness (Was in control of the crystal core of darkness which was stated to be Superior to the void[1] and was going to use it's power to destroy the multiverse.[1])

Speed: At least Relativistic+ (Capable of keeping up with Post-Timeskip Noctis), Lightspeed with Warp Strike (Can also use the Warp Strike, which travels at the speed of light) | At least FTL (far faster than before, should be comparable to King of Light Noctis) | Massively FTL+ (Should be comparable to the other Warriors of Spiritus) far higher with the Crystal Core

Durability: At least Country level, higher with Arminger Arsenal, possibly Multi-Continent level (Tanked attacks from Noctis, survived a full power blast from Noctis' Armiger Arsenal, only finally going down after being struck by all 13 of his Royal Arms in succession after the fact) | At least Large Country level, possibly Multi-Continent level | At least Multiverse level+ far higher with the Crystal Core (Completely stalemated the Dissidia cast)

Range: Extended melee range with various weapons. Hundreds of meters with magic. Tens of kilometers with warping and Armiger Arsenal. | Multiversal+ higher with the Crystal Core

Intelligence: Despite his frivolous and lighthearted exterior, Ardyn is wickedly intelligent. Being the Chancellor of Niflheim, Ardyn is incredibly skilled in the arts of negotiation and deception, effectively ruling the empire despite his lack of royal title, convincing Lucis to sign a false peace treaty with Niflheim, and tricking the entire party into believing that he was simply an ordinary traveler, never realizing his true identity until Ardyn told them himself. He also invented the process for converting humans into completely inorganic Magitek Infantry, a deed that fueled his rise to his position as Chancellor and paved the way for the rest of his plans. In combat, Ardyn fights almost identically to his descendant, Noctis, summoning a wide variety of different weapons in battle and swapping between them on a whim. To this end, his long life has granted him thousands of years of experience dealing with Daemons and any other enemies in his path, allowing him to evenly duel Noctis despite the latter’s awakening as the King of Light.

Weaknesses: Ardyn is somewhat arrogant and likes to taunt his enemies. He can be killed permanently by destroying his soul in the spirit world with the Ring of Lucii's power. | If he is cut off from the Crystal Core, he cannot use it's power

Armiger Arsenal: Much like his descendant, Ardyn is capable of channeling the power of the previous Kings of Lucis and manifest their weapons around him, granting him flight and far higher power and speed.

Key: Base | Dawn of the Future | Dissidia