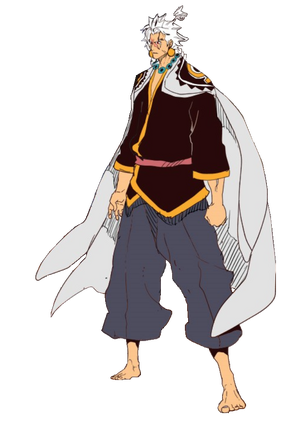 Ardun or First Crown Prince of the Heavenly Realm is the eldest and most powerful of the Jade Emperor's three sons. He has power over the element of earth and is the God of Combat/War.

Powers and Abilities: Superhuman strength, speed, durability and stamina, Invulnerability (Ardun's body is made up of the holy metal Barbadium, which has been stated to be the hardest material on Earth), Non-Physical Interaction (Can interact with Borrowed Powers), Earth Manipulation, Lightning Manipulation, Summoning (Can summon golems made of earth), Metal Manipulation, Petrification (Can petrify anyone he is in extended contact with), Telepathy, Weapon Creation, Weapon Mastery, Immortality (Type 1), Sealing and Forcefield Creation (Ardun's necklace, Bakyosak, sealed Sujin Lee in a bubble and was stated that not even a God could escape it), Non-Physical Interaction, Extrasensory Perception, Law Manipulation (Gods can form contracts that prevent other species from harming them), Can not be harmed by Humans (The Taboo placed on humans made it impossible for them to harm divine entities), Resistance to Power Nullification (The crowns that the Princes wear to protect them from Sujin Lee's power nullification)

Attack Potency: At least Small Star level (Clashed head to head with Mori Jin and defeated Uma. Cracked the Sage Realm planet in half with Chamyogeom, and the Hyunmoo Hammer is capable of destroying the Sage Realm with a single blow), likely higher (Mori said that Ardun was likely stronger than Uriel)

Striking Strength: At least Small Star Class, likely higher (Was exchanging strikes with Mori Jin which was dispersing a large part of the atmosphere over the Ore Country which is continent-sized; the air pressure of his casual punches alone can wreck large countries and cause explosions more powerful than nuclear bombs that vaporize the ground and cause craters going down into the planet's mantle)

Durability: Small Star level, likely higher (Casually took all of Sujin Lee's attacks and easily tanked many of Mori Jin's hits, only faltering once his body began to crack from repeated strikes and when Mori left a shard of the Ruyi Jingu inside of the Crown Prince to destroy him from the inside out)

Stamina: Incredibly high, easily shrugged off blows from Mori and tried to stop him even after having his insides blown apart by the Ruyi Jingu's shard.

Intelligence: The calmest and collected of the Three Princes with thousands of years of battle experience as the god of war.

Weaknesses: Loves a good fight and will make irrational decisions to get one. Rather arrogant due to his position.