VS Battles Wiki
Register
Don't have an account?
Sign In
Advertisement
in: Tier 6, Tier 6-C, Tier 9,
and 58 more 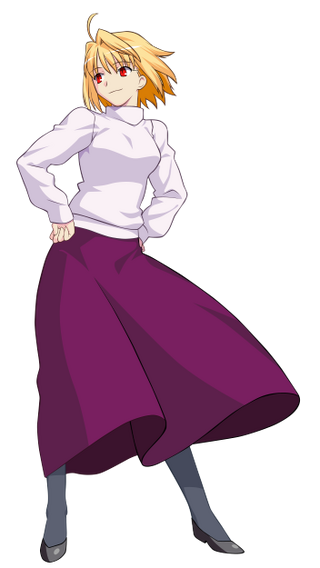 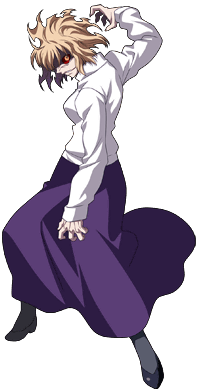 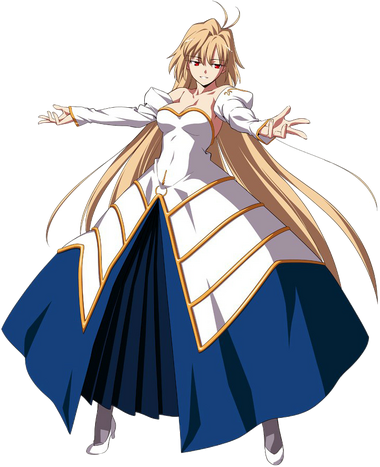 Arcueid Brunestud is the White Princess of the True Ancestors, created for the meaningless purpose of being the strongest of their kind. Tasked with eradicating those True Ancestors that fell to their bloodlust and the Dead Apostles that turned against them, she was nothing more than a tool used for this purpose, lacking any personality or identity. She was only taught what was needed to kill her targets, and whenever she completed her mission, she went to sleep and had her memories erased.

She never had to resist her vampiric impulses, and the rest of the True Ancestors thought she had none. This changed when Michael Roa Valdamjong tricked her into feeding on him, awakening her bloodlust and sending her on a rampage that wiped out most of the remaining True Ancestors. After that, she managed to restrain herself, overpowering her vampiric impulses yet constantly battling against them. While she eventually succeeded in killing Roa alongside the Burial Agency, he had already perfected his method of reincarnation. And so, Arcueid spends her life awakening whenever Roa manifests, tracking him down, and killing him, again and again.

Shiki meets her the day after he cuts her to pieces, at which point she introduces herself in an oddly cheerful manner. Due to Shiki nearly killing her, she's temporarily vulnerable but still strong enough to kill him, so she strongarms him into helping her destroy Roa. Over the course of their temporary relationship, Arcueid gets the chance to really see the world for the first time due to sleeping almost all of her very long life and starts truly developing her emotions and identity.

Superhuman Physical Characteristics, Extrasensory Perception (Can sense the presence of humans and non-humans), Enhanced Senses (Sense of smell), Mind Manipulation, Memory Manipulation, Paralysis Inducement (With the Mystic Eyes), Information Manipulation and Soul Manipulation (With Mystic Eyes. A True Ancestor's bite also soils the soul), Duplication, Shapeshifting, Absorption, Self-Sustenance (Type 2, does not need to drink or eat to survive), Blood Manipulation, Necromancy, Can boost her stats to become slightly higher than her opponent's, Conceptual Manipulation, Reality Warping and Statistics Reduction with Blut Die Schwester (Allows her to warp her surrounding environment into Earth and on the Moon she can conceptually reduce an opponent to a sixth of their power on the moon), Reactive Evolution (Becomes more resistant to magecraft and conceptual weapons used on her, as well as physical effects), Reactive Power Level (Due to her Ultimate One ability and Blut die Schwester, Arcueid will always be one step stronger, faster, and more durable than her foe for as long as she is on Earth or the Moon), Portal Creation (Tore open a hole in space in order to return to Earth from the Moon Cell), Teleportation (Can dematerialize and recreate her body elsewhere), Can recreate any natural phenomenon via Probability Manipulation and Subjective Reality, such as Elemental Manipulation, Air Manipulation, Chain Manipulation, Time Manipulation, Spatial Manipulation, Light Manipulation, Energy Manipulation, Matter Manipulation, and Transmutation, Power Bestowal (Archetype Earth claims to be able to grant immortality to others), Regeneration (Works by reversing time; At least Mid, likely High-Mid normally; her regeneration should be comparable to Roa's. Low-Godly over time / with lots of energy; created herself a new body after her previous one was destroyed by Shiki's Mystic Eyes), can exist as a disembodied soul, Immortality (Types 1, 3, 5 and 7; at full power or when she's under the full moon, Arcueid lacks a concept of death), Power Nullification (Arcueid, being both 800 years old and a True Ancestor, possesses enough Mystery to be capable of nullifying most Magecraft in existence)

Range: At least Tens of meters. At least Hundreds of meters up to Planetary with Marble Phantasm | At least Low Complex Multiversal as Archetype: Earth

Intelligence: As the White Princess of the True Ancestors, Arcueid is by far the strongest and most skilled among them, being an expert when it comes to hunting down Dead Apostles and has extensive knowledge of human magecraft and magical phenomenon. She is the only member of the True Ancestors who is able to hold back her bloodlust with sheer willpower and knows the inner workings of the Dead Apostle Ancestor's powers to such an extent that she is able to use Nrvnsqr Chaos' remains to heal Shiki. However, outside of supernatural matters, she's rather airheaded, naive, and clueless due to being kept inside Millennium Castle Brunestud for so many years, thinking that school was a place to have fun and hypnotizing the entire faculty into believing she was a student so she could spend the whole day with Shiki.

Weaknesses: Arcueid must use a percentage of her power, to keep herself under control and hold back her bloodlust. Powerful Conceptual Weapons like Gáe Bolg are able to kill her if she is not familiar with them, though she is familiar with most Conceptual Weapons. Her backup from Gaia can be cut off by powerful barriers or reality marbles that overwrite the world. However only beings as powerful as Aliens can completely cut off her backup. After getting "killed" by Shiki Tohno, Arcueid is heavily weakened. In that state, she has poor stamina and cannot utilize her Marble Phantasms more than a few times, and cannot stand garlic. | Same backup weakness as in base as Archetype: Earth and Red Arcueid. Archetype: Earth is also quite arrogant.

Marble Phantasm: The ability to materialize a phantasm - a vision. It is the natural power of the World's "senses of touch", the Elementals. By connecting their will directly to the World, they are able to freely manipulate the world at will to bring it in line with their vision. As the user is the part of nature, they can change the world as they wish, they are able to create any phenomena as long as it's within their own imagination and the scope of nature. A transformation independent from nature - such as transforming a human - cannot be directly realized, though it can be accomplished indirectly. Like a mathematical metaphor involving drawing a white marble from a bag of black marbles with a one percent chance, Marble Phantasm is the ability to alter the probability and raise that chance to one hundred percent and definitely pick the white one amongst all the black ones.

Even while severely weakened and restricted, Arcueid has shown the ability to turn layers of the atmosphere within a corridor into a vacuum to eviscerate her foes. When not restricted, Arcueid can create things on the scale of a village in the mountains, she can even recreate the Crimson Moon from a thousand years into the future. The Millennium Castle Brunestud in which Arcueid lives is a product of her Marble Phantasm. As Archetype: Earth she is capable of creating, manipulating and altering chemical elements, forming and shaping light, fire energy blasts, locking targets in an energy sphere, transmuting targets, and much more.

Blut die Schwester: Blood Sisters: An ability that allows her to bring a replica of the moon down to Earth as a devastating projectile like the Crimson Moon once did. A special quality she possesses that is treated as a Noble Phantasm, it's a method of world configuration that she possesses due to embodying the basic rules of the Earth and the Moon, allowing her to utilize the relationship and difference between the Earth and the Moon as a means of attack. As Arcueid became the Earth's sense of touch, she possesses this Earthly Authority despite originating from the brain of the Moon and being an avatar of the Moon.

It is an Authority that allows her to terraform her surrounding environment into her side(the Earth's side). As the Moon's gravity is one-sixth of the Earth's, she is able to utilize the difference in gravity as a means of attack, allowing her to conceptually reduce her opponent's power to a sixth of their total power while on the Moon. On Earth it becomes her Authority to increase her specs to be slightly above her opponent's.

Alt Nagel: An ability that allows Archetype: Earth to create immensely destructive pillars of wind that can stretch as far as the heavens.

Denier of Human History: Dead Apostles are beings diametrically opposed to Heroic Spirits. While servants uphold, protect, and support human civilization, Dead Apostles exist to defile the laws of man. Legendary treasures born from the hands of humanity will have their "divine protection" destroyed. However, this does not apply to the weapons created by the gods themselves. Unless Legendary Treasures and Noble Phantasms are wielded by the proper "Emissary of The Throne," they will be totally useless against dead apostles. The weapons either glance off with no effect or crumble to dust.

Mystic Eyes of Enchantment: Arcueid has incredibly powerful Mystic Eyes, allowing her to enchant the heart and souls of others if they make eye contact with her, but she has the ability to restrict this to prevent it. She can also use them to hypnotize others and direct them with basic suggestions, using it to modify the memories of an entire school faculty and student body in order to slip into a school unnoticed.

Ultimate One (Primordial One): Due to being part of the Counter Force, Arcueid receives power and support from the planet in order to increase her specs (such as strength, speed, and durability) to be slightly above her opponent's. When used on Earth or against an opponent that originates from Earth, she can activate it without any penalty or limitation. However there is a limit to the parameters she can gain, and when used in the Moon Cell, the duration of the skill is reduced. Furthermore, it isn't very useful against opponents with great versatility or opponents who do not rely on physical attributes alone, such as Gilgamesh, as merely boosting Arcueid's stats will not bridge the gap in versatility.

Shall We Play Around Some?: Arcueid's Last Arc in Melty Blood, in which Arcueid manages to manifest her full power as Archetype Earth for an instant, completely nullifying an incoming attack before smiting an opponent with a powerful beam of energy from above.

Arcueid in the Tsukihime remake