VS Battles Wiki
Register
Don't have an account?
Sign In
in: Warcraft, Characters, Game Characters,
and 26 more 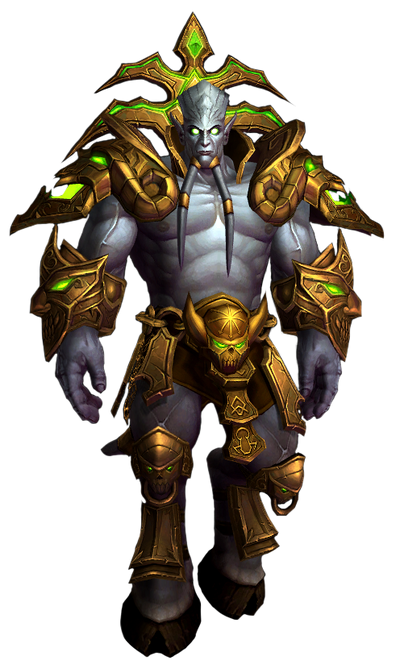 Archimonde the Defiler was one of the leaders of the Burning Legion who served as the Overlord of the Legion's military might. Described as cunning and far-sighted, under his leadership the Legion was driven to commit acts of extreme violence. The Defiler was exceptionally brutal. He mercilessly slaughtered any of his minions who had failed him. Archimonde was the first Eredar to accept Sargeras' offers of power and went on to become the sinister hand of the Dark Titan.

In millennia past, before the corruption of his people, Archimonde was one of the rulers of the Eredar race alongside Kil'jaeden and Velen. This Triumvirate ruled for many years until Sargeras noticed the Eredar's use of arcane magic. Seeing the extremely intelligent race as the perfect tacticians and commanders for his Burning Legion, Sargeras corrupted most of the Eredar, transforming them into demons.

As the Overlord of the Legion's forces Archimonde brought death and destruction to countless worlds across the cosmos. His only known defeats, over the course of twenty-five thousand years, came from the world of Azeroth, where his forces were only barely pushed back at tremendous costs for the defenders each time.

Powers and Abilities: Superhuman Physical Characteristics, Likely Large Size (Type 0, stands as tall as Mannoroth), Immortality (Type 8. Demons who die outside the Twisting Nether will eventually re-materialize within the Twisting Nether), Regeneration (Low-Godly) via the Twisting Nether, Size Manipulation (During his fight with Malorne Archimonde grew much larger, and during his assault on Nordrassil he grew hundreds of feet tall), Hammer Expertise, Magic, Summoning, Portal Creation, Life Energy and Soul Absorption, Chaos Manipulation, Life Manipulation and Soul Manipulation via Fel Magic (Fel Magic is a pure manifestation of disorder which harnesses the life energy and souls of living things as fuel), Spatial Manipulation (Demons are able to tear their way into the physical universe), Energy Manipulation and Absorption, Elemental Manipulation (Of the Fire, Earth and Electric types.), Status Effect Inducement (Can paralyze enemies inside of fel forcefields, sealing their ability to move. Can stun enemies with his attacks via Bash), Petrification (Displayed the ability to turn enemies into stone during the War of the Ancients), Teleportation, Forcefield Creation and Levitation (Capable of creating forcefields that allow him to levitate above ground), Mind Manipulation and Telepathy (Can mind smash his enemies with mental assaults), Fear Manipulation (with Fear), Power Nullification (via Soul Charge or by summoning Dreadstalkers), Dimensional BFR (with Nether Banish), Damage Boost (Several of Archimonde's spells deal greatly increased damage under certain conditions), Resurrection (Demons that die outside of the Twisting Nether will simply have their souls thrown back into the astral dimension and return in a new body. Such resurrections are greatly hastened by Argus the Unmaker). Resistance to Chaos Manipulation (Demons originate from the Twisting Nether and are immune to its nature, including its Chaotic energies), Magic (Able to coexist with the Twisting Nether's rampant volatile magical energies), Spatial Manipulation, and Reality Warping (Demons are born from the Twisting Nether and are able to coexist with its effects, which are able to tear through the Great Dark Beyond and warp creation)

Attack Potency: At least Multi-Continent level, likely far higher (Far superior to Mongrethod, and other entities that destroyed entire planets, the latter over time. Lore states that the most powerful of Eredar can destroy planets, and Archimonde is among the strongest. Archimonde was going to destroy Draenor, see note)

Standard Equipment: Gavel of the Eredar

Intelligence: Genius level intellect. Archimonde was a tremendously talented sorcerer and leader even among the Eredar who have been referred to as a race of geniuses. After he became a part of the Triumvirate, he united the most exalted magical orders on Argus into the Augari, the greatest magical school on the planet, which Archimonde himself lead as its' master. After his corruption, Archimonde became an unparalleled strategist who lead innumerable invasions across the stars and laid waste to countless worlds and even more sentient species.

Weaknesses: Arrogance and his inability to keep his anger in check (Once killed a Fel Guard in anger over his inability to break through Elune's protection of Tyrande). Should Archimonde be slain inside of the Twisting Nether he will die permanently.

Note: The Reason for the tiering, in the prophet's book, Velen, we see this quote:

"This last being leveled the rock sculptures around him, clearing a space where he could kneel in the dust made from his destruction and draw symbols of dread power with his clawed finger. When he finished, there was a moment of perfect quiet as the slaughter halted and the entire world waited in horrified stillness.

And then, an explosion.

The unleashed energies ripped the world's surface apart, and Anduin found himself crying out and throwing his arms up in terror, but the magics moved right through him without harm. The Legion marched back into the portal, returning to the dark nexus of the demons' dwelling, and in their wake was left... nothing." -Velen: Prophet's Lessions.

In this, a casual unnamed Eredar, effortlessly below Archimonde or Kil'jaeden, destroyed the crust of an entire planet.