VS Battles Wiki
Register
Don't have an account?
Sign In
Advertisement
in: Tier 7, Tier 7-C, Tier Low 7-C,
and 24 more 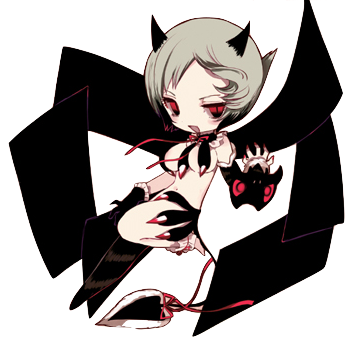 Archfiend Pam is a magical girl known for her strength. Within the Magical Kingdom, she was formerly the head of the Department of Diplomacy, before becoming their “ultimate weapon”. She’s also the founder of the Mao School, an organization in which the members are mostly battle enthusiasts and strive to be stronger.

From both the Magical Kingdom and Mao School, Archfiend Pam is respected and appreciated, due to her massive experience and battle prowess, but also feared for the same reasons. Like her students, she’s a battle enthusiast herself, and her blood can’t resist but boil at the mere thought of a tough fight; she’s learned to control herself, and only remove her restraints when needed. Despite that, she’s respectful to others, and has a strict moral code, as while she loves combat, she’s by no means a chaos-lover or anything close to a criminal. She is considered the strongest Magical Girl of the current generation, and once was Cranberry’s teacher, and feels remorse about how she became. She’s sent to B City by the Department of Diplomacy to team up with Mana, Hana Gekokujou, 7753, and Ripple, with the mission to apprehend a serious criminal.

Classification: Human, Magical Girl, Founder of the Mao School, Former Head and member of the Magical Kingdom's Department of Diplomacy, Part of the B-City Investigation Team

Lifting Strength: At least Class 50 (Considerably stronger than Captain Grace who should be able to lift her sailboat)

Durability: City level with her wings (Stated to survive a city-wide nuclear blast at point-blank range. The referenced city has similar characteristics to Catania, which translates to a blast energy of 23 megatons). Town level+ with her body, likely higher.Small Town level with clones (Easily took hits from Captain Grace, except her cannon and ship)

Range: Extended melee range up to kilometers for combat, Unlimited for the deployment of wings

Intelligence: Has among the most experience out of any magical girl that has ever existed. Thanks to that, her instincts are perfect, her battle prowess unmatched and is extremely quick-witted. She never underestimates anyone, no matter how weak they look, and is always ready to strike at any suspicious signs. When battling someone, she places all her focus on them to deploy her power to its fullest.

Standard Tactics: Enters a bloodlusted state against opponents she deems strong and that make her excited, ignoring external stimulus and, to a certain degree, pain

Weaknesses: None of the regular human weaknesses. If she becomes unconscious, she turns back into a human and loses all the magical girl advantages. When battling someone, she can focus so much to the point of ignoring external stimulus, though never to the point of losing track of her surroundings.

Wings Manipulation: Archfiend Pam's magic allows her to freely manipulate the four large black wings that are on her back. She can change their size, shape, color, speed, constitution, and all characteristics, or add new ones. As such, she can change the components they are made of, give them sensory organs that transfer all gathered information to Pam live (for example, giving an eyeball with the range and precision of a high-tech telescope), turn them into any shape, including humanoid ones, have them split, turn them into clothes or shields, and even manipulate the surrounding environment, like weather and temperature, or make them manipulate elements. The wings can regenerate quickly, and if they were to disappear or get destroyed, Pam can split the remaining ones to have 4 of them again, though, she can have only up to 4 sheets of wings active at once, and can’t split her wings immediately after one has been destroyed, needing to wait a few seconds. If they leave the body, the wings can act autonomously, but they can only perform simple instructions, like “patrol around”, “attack anyone with antagonistic intentions”, or “guard the building”. In emergencies, Pam can use the 2 extra hidden wings in the middle of her back to take opponents by surprise; though smaller, they have the same versatility as the 4 other ones. There’s no range limit to how far her wings can travel away from her.