Archer of "Red" is the Archer-class Servant of the Red Faction in the Great Holy Grail War. While she is originally summoned by Rottweil Berzinsky, she later becomes one of the Servants of Shirou Kotomine. She also appears in the First and Third Singularities of the Grand Orders, Orleans and Okeanos.

Her True Name is Atalanta, the Chaste Huntress of Greek Mythology. While she was born the princess of Arcadia and daughter of King Iasus, she was abandoned in the mountains immediately after birth due to being born a female when her father wanted a male heir, surviving only due to Artemis' divine protection as the goddess took pity on her. She was then raised by a sacred bear of Artemis and thus devoted her life to her in worship and gratitude.

She is famous for three tales: joining Jason's Argonauts, slaying the Calydonian Boar, and the dispute over her marriage, which ended in her forcibly being married after being cheated in a race for her hand in marriage, breaking her vows. As punishment, it was said that she was transformed into a lion, and she retains the traits of a lion as a Servant in the form of her ears and tail.

Superhuman Physical Characteristics, Master Archer, Expert Hand-to-Hand Combatant, Enhanced Senses (Her sense of smell is far greater than that of other Servants. Her eyesight is great enough to allow her to shoot an enemy that would appear as no more than a moving dot at near-zero visility, and is able to spot structures from several kilometers away even while it is in complete night), Limited Power Nullification and Servant Physiology

Most of her other abilities minus Magic Resistance. Berserk Mode, Shapeshifting and Rage Power in Agrius Metamorphosis (Using the Calydonian Boar's pelt, she can transform into a "Monstrous Human", and freely change her body to overcome obstacles in her way. Such as growing wings, fusing with her bow to shoot arrows weaved from magical energy or turning into the Calydonian Boar itself. Wearing the pelt increases her strength, speed, and durability but at the cost of most of her sanity), Energy Projection and Absorption with Tauropolos Skia Thermokrasia (Upon impact it causes an explosion of energy and a dark substance, which forcefully absorbs her target unless they possess an extremely powerful magic resistance skill)

Attack Potency: Island level (Should be comparable to other Servants, such as Archer). Higher with Tauropolos (When drawn to its limits, its power surpasses A-rank attacks, and it can pierce Siegfried's Armor of Fafnir) and with Phoebus Catastrophe (A B-rank Anti Army Noble Phantasm. When focused on a smaller area, it can nearly kill Servants like Spartacus) | Island level (Has C++ strength, making her much stronger than before). Higher with Tauropolos (When utilizing her bow, she managed to fight evenly with Jeanne and score a mutual kill against a weakened Achilles) and with Tauropolos Skia Thermokrasia (An A-rank Anti-Unit Noble Phantasm that utilizes all her magical energy to deliver a devastating blow, and should thus be comparable to other A-rank Noble Phantasms like Durindana)

Speed: Massively Hypersonic (Has A-rank agility and is one of the swiftest Servants of the Great Holy Grail War, with even Jeanne struggling to keep up with her) | Massively Hypersonic (Her agility is ranked up to A+, making her even faster. Blitzed Jeanne in combat and kept up with Achilles, although the latter had his heel wounded prior before which slowed him down by 70%).

Lifting Strength: Class 5, possibly higher (Possesses a D Rank in the Strength Parameter, making her superior to the likes of Anastasia, who can lift Ivan clean overhead, and should not be much weaker than Medusa)

Durability: Island level (Took a kick from Spartacus, but would've been killed instantly had it fully connected) | Island level

Stamina High. Other Servants can fight for nearly an entire day without stopping.

Range: Kilometers with Tauropolos (Can see and fire at targets from several kilometers away in total darkness. Her archery skill is comparable to Chiron's).

Intelligence: Atalanta is a peerless huntress skilled in, tracking, restraining wild beasts, camouflage and all other skills needed for a hunter. Her skill with a bow is said to tread into the realm of Gods, with her only peer being the model for Sagittarius, Chiron. Her skill is so great that she is able to strike targets in a dense forest from an extreme distance that they appear as moving dots during nighttime with perfect precision. Her technique is as natural as flowing water, allowing her to rapid fire arrows in a similar fashion to a machine gun and fire through gaps between her allies without hitting them. During her fight against Spartacus, she demonstrated her quick thinking by quickly setting up what would normally be a killing blow, by disarming him before using her superior speed to grab his sword and pin him down by exploiting his regeneration. When utilizing Agrius Metamorphosis way of thinking changes into that of a wild beast, making her combat style increasingly deadly as thoughts regarding how to kill an enemy are sped up. When combined with her self evolution skill, she is able to kill an enemy even faster, as she is able to constantly evolve to accompany her increased speed of thinking.

Weaknesses: Atalanta refuses to fight or kill children. If she uses Agrius Metamorphosis, Phoebus Catastrophe will be sealed and she will lose her sanity and reason, which eventually results in her self-destruction. Ripping off the pelt will cause her to revert to her Archer form. Cannot fight in spirit form.

Phoebus Catastrophe: Complaint Message on the Arrow: A "complaint letter" requesting for divine protection, sent to the moon goddess Artemis and the sun god Apollo, fired into the sky as two arrows. After the two arrows pierce the clouds, a faint light slowly fills the sky and calls upon a torrential rain of arrows upon her enemy. A single arrow can easily pierce Avicebron's golems, but Servants have the strength and speed to deflect or dodge; while their individual damage is low, their true power comes in their sheer numbers. However, Atalanta can limit her range to focus it onto a single enemy, vastly increasing its strength. When utilized like this, it is capable of easily reducing even Servants as strong and durable as Spartacus to a near-death state.

Agrius Metamorphosis: Boar of Divine Punishment: The pelt of the Calydonian Boar, a Monstrous Beast that Artemis released upon the Earth in a fit of rage against those who failed to honor her blessings. As the one who claimed its pelt as spoils of war, Atalanta possesses it as a cursed Noble Phantasm. Upon activation, it seals Tauropolos and transforms Atalanta into a "Monstrous Human", and gains a condition similar to A-rank mad enhancement, resulting in all her parameters save for luck ranking up at the cost of her reason. In addition, it also grants her the equivalent of A Rank in the Transformation skill, allowing her to gain various characteristics depending on situation and environment. She can transform the pelt into a pair of wings for flight and form a dark version of Tauropolos to fire arrows seething with black magical energy that have homing properties. She can fire these en masse, creating a massive barrage powerful enough to make Ruler consider using her Noble Phantasm to withstand it.

Independent Action: The ability to remain independent and exist in the world without the magical energy supplied by a Master, allowing the Servant to act autonomously and the Master to save their own magical energy for spells. Atalanta's A-rank Independent Action allows her to act even without a Master and stay in the world for up to a week without one. However, when it comes to the use of high-cost Noble Phantasms, backup from one's Master is necessary. She also possesses this skill as a Berserker.

Magic Resistance: An innate ability that grants protection against magical effects. Unlike the Resistance effect which merely rejects Magical Energy, this ability cancels the spells altogether. Atalanta's D-rank Magic Resistance can only cancel Single-Action spells but will falter against more complex and stronger spells. However, she loses this skill as a Berserker.

Beast Form: A skill identical to the Class Skill, Mad Enhancement, the source of the Berserker class's power. It is the equivalent of A-rank Mad Enhancement, raising all her parameters with the exception of luck, in exchange for most of her sanity and reason. While one can communicate with her, it's impossible to persuade her with logical reasoning and she can't discern whenever one is an ally of the Human Order or not. Additionally, should her master go against the "rules" carved into her heart, she will throw away the master-servant relationship and will possibly even kill them.

Aesthetics of the Last Spurt: A skill derived from legends in which Atalanta always let her opponents run ahead of her in footraces, and yet always won. By allowing her opponent to take the first move, Atalanta can analyze their options and pass them by swiftly.

Calydonian Hunt: A skill whose canon effects are currently unknown.

Crossing Arcadia: A skill that allows for high-speed movement across a battlefield by rapidly jumping over any obstacles, including opponents. She also possesses this skill as a Berserker.

Wild Beast Skills: As a "monstrous human" under the effects of Agrius Metamorphosis or when summoned as a Berserker, Atalanta gains the following skills in addition to Crossing Arcadia: 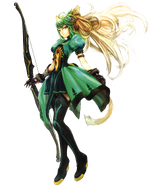 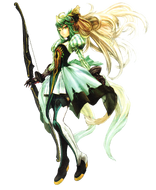 Start a Discussion Discussions about Archer of Red (Atalanta)