VS Battles Wiki
Register
Don't have an account?
Sign In
Advertisement
in: Characters, Cartoon Characters, Evil Characters,
and 37 more 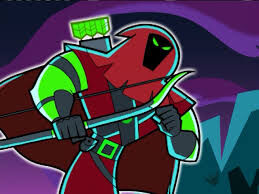 The Archer Ghost is a minion of Prince Aragon and partners with the Executioner Ghost. His job was to keep Danny Phantom distracted and away from Sam until the school's beauty pageant was over. He later battles Danny after the later and Tucker enter their realm, however, he was defeated by Tucker throwing his PDA and embedding it into his forehead.

Striking Strength: At least Multi-City Block Class+ (Can harm people on his level with his physical strikes)

Durability: At least Multi-City Block level+ (Could survive a ghost ray from season 2 Danny Phantom without much injury)

Intelligence: Average (Is skilled with a bow and a capable fighter)