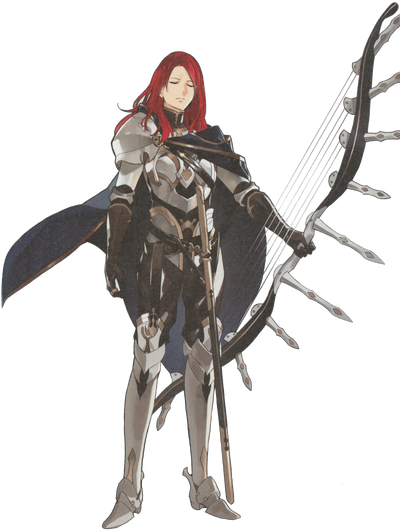 Archer is an Archer-class Servant, that appears in the sixth singularity, Camelot, and the sub-singularity, Seraphix.

Archer's True Name is Tristan, one of King Arthur's Knights of the Round Table. Renowned for his skill with the bow as well as his solemn personality, he was one of the most popular knights in Arthur's court. However, he left Camelot after he came to the conclusion that "The King does not understand how others feel." Tristan later perished after being poisoned in battle, with his tragic tale becoming one of the most popular legends in Europe.

Classification: Archer-class Servant, Knight of the Round Table, Heroic Spirit

Powers and Abilities: Superhuman Physical Characteristics, Master Archer and Swordsman, Vibration Manipulation with Failnaught (Can shoot sonic vacuum blades that home in on their targets and lay down vacuum blade traps in his vicinity), Limited Power Nullification and Servant Physiology

Attack Potency: Island level (As one of the famed Knights of the Round Table, Tristan is considered a high-quality Servant, as such he is superior to Archer). Higher with Failnaught (An A-Rank Anti-Army Noble Phantasm, that allows Tristan to shoot vacuum arrows that are powerful enough to decapitate Gawain without spilling any blood and shoot down Arash's arrows. His arrows were also able to instantly kill Hundred Faces and Serenity and heavily wound Cursed Arm, and would have killed Ritsuka's group of Shielder and Da Vinci had the latter not warn them to not move when they were in hiding).

Speed: Massively Hypersonic (Has A-Rank Agility, making him relatively fast compared to most Servants and comparable to Servants like Saber. His Failnaught is able to keep up with even fast Servants like Cursed Arm, Hundred Faces, and Serenity)

Lifting Strength: Class 25 via power-scaling (Should be comparable to Saber as a fellow Knight of the Round)

Durability: Island level (Clashed with Shielder and Bedivere, who was armed with Excalibur at the time)

Stamina: High (Servants can fight for more than a day without stopping and can continue fighting for as long as they have a steady supply of mana)

Range: At least several kilometers (Comparable to Arash, who is superior to Archer as a marksman)

Intelligence: As one of the Knights of the Round Table, Tristan was a master swordsman and a skilled battlefield commander who had more than three times the feats and experience of any normal knight. However, he particularly stood out from his peers in the use of the bow, with Arthur Pendragon describing him as being able to surpass the limits of the bow as easily as he breathes despite the unusual design of his personal weapon, which baffled other archers of the time.

Weaknesses: Tristan cannot fight while in Spirit Form. He is vulnerable to poison-based attacks since he was killed by poison in life. Suffers deep regrets over his parting words with King Arthur and is very emotional, often being restricted from potentially harming innocents by his code of chivalry.

Failnaught: Fantasia of Lamentation: Tristan's Noble Phantasm, a bow said to "always strike its target". Created using the strings of his favorite harp, it is able to fire vacuum blades that can cut other Servants to pieces in an instant simply by slightly stroking a single finger across the bowstrings as if it were a musical instrument. These "arrows" are unusually fast even among other Archers, with their loading speed and automatic angle adjustments making them virtually impossible to dodge unless one is able to leap through the boundary between reality and fantasy or stay out of its maximum range.

Failnaught can also be used to tie down foes by firing arrows in all directions that create invisible strings that bind foes in place. In addition, obstacle laden areas such as forests or cities allow Tristan to lay down traps such as foot snares. Should a foe step into one of these traps, they would be hoisted into the air, unable to move before being mercilessly ripped to pieces in an instant.